FREE Halloween Project - and the Rest of the Pictures

Do you have a long Stampin' Up! Wish list??  Get it all at once in the fully customizable, zero obligation, Starter Kit. Get $125 worth of products of your choice for only $99 (with free shipping)!! On top of that, when you sign up by August 31 - just found out this offer has been extended to September 16 - you will get a free Halloween project kit valued at $65 (a Halloween Stamp Set and all the supplies to complete it). You would have until December to decide if you would like to stay active and purchase at a discount or do nothing and keep your kit!  E-mail or call me if you are interested in joining my team!

You saw about half of the USS (Upscale Swap) cards from my post the other day, so I thought I would show you the rest of them.  I love getting these cards in the mail! 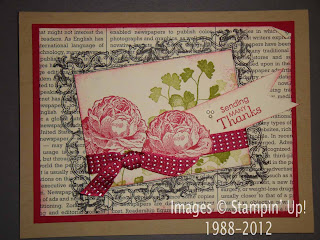 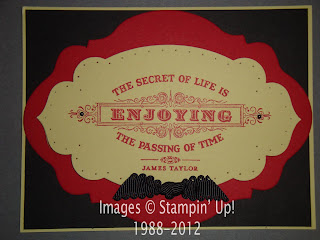 Lisa Gray - From My Heart 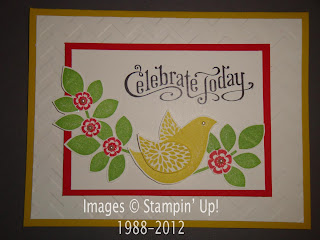 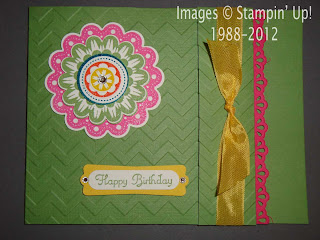 Jayne Stenstrom (me!) - Quint-Essential Flower
(You actually have already seen this card if you follow my blog). 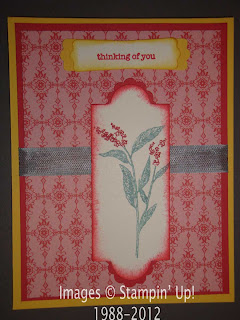 Nature Walk
I don't know who made this because there wasn't a name on the back.  Tsk, tsk...

Hope you've been inspired!  Until next time...

I've been MIA for a while - did you notice? I always wonder...

Anyway, I have some of the Upscale Swap cards from our swap in June (oops!).  Well, in my defense, it was the END of June when we swapped them.  So without further ado, here are some of the cards: 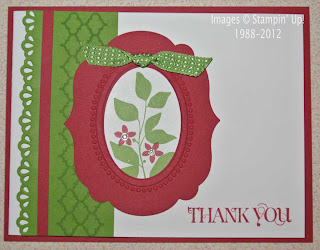 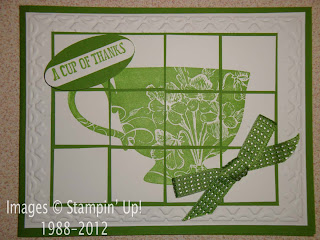 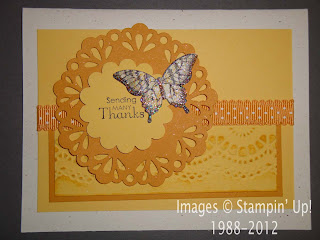 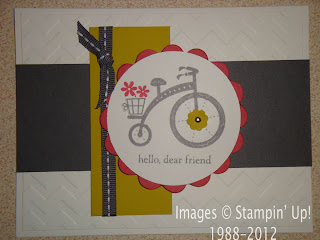 Debra Currier - Moving Forward
This is the Ronald McDonald House Charity stamp set for this year.  When you purchase this year's exclusive RMHC stamp set, Stampin' Up! will donate $3 to RMHC! 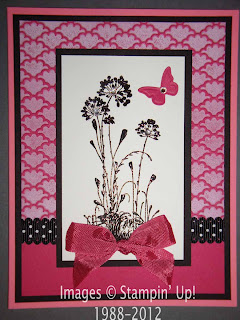 I am starting up my fall classes with a 10 for $20 Card Class on Tuesday, August 28 at 6:30 PM. For those of you who may not have attended this type of class before, I know you're going to love it! You get to make 10 cards (5 different designs) that you are able to personalize with whatever greetings you need. They will be fairly quick and simple cards that you can easily finish in a couple of hours.

I ask all of my class attendees to bring their own scissors, adhesive, and paper trimmer to classes. Everything else to complete your cards will be provided. Classes are held at my house - let me know if you need the address or directions. Space is limited, so reserving a spot in class quickly is recommended. You can let me know if you plan to come, but I must have your payment to reserve your spot in class. Please no children - classes are for adults and older teens only.

Here is a quick share today.  They are Post-It Note Holders made with Serene Silhouettes stamp set and Comfort Cafe DSP. 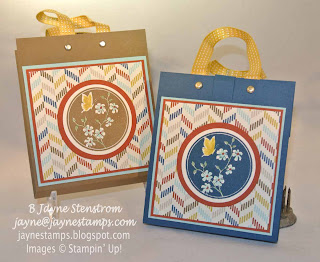 We made these at a Chalk-a-holics meeting as one of our make-n-take projects.

I'm Jumping on the Bandwagon with Triple Time Stamping

I have seen a lot of cards lately done with a technique that has been referred to as "Triple Time Stamping".  This is a very easy technique that gives you a card with some "wow" factor!

This first one was done with the Snowflake Soiree stamp set (in the Holiday Catalog) with Soft Suede and Early Espresso.  I love snowflake stamp sets!  Because this is done in the browns, it doesn't really look like snowflakes.  I also used some of our new Champagne Glimmer Paper - love this! - and our new Snow Flurry Bigz Die.  We actually made this card at our last Chalk-a-holics meeting for a make-n-take project. 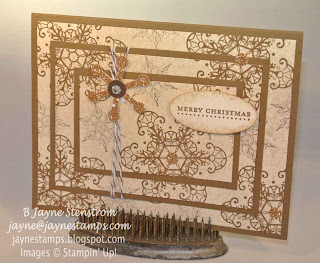 Here is another card made with the same stamp set, but using Not Quite Navy, Bashful Blue, and Marina Mist.  I saw a sample like this on Stampin' Connection - a card and idea sharing place that is exclusive to Stampin' Up! demonstrators. 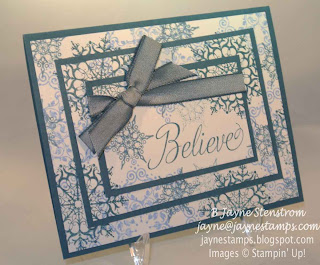 I also decided to try one with the French Foliage stamp set.  This uses More Mustard and Bravo Burgundy with some Crumb Cake ink.  Aren't these cards so cool? 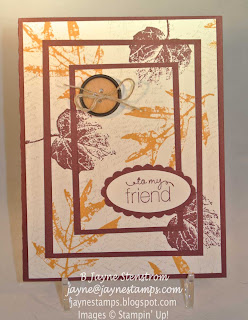 You can easily make some cards like this.  Another demonstrator, Dawn O., has made a video on how to make these cards.  You can find that HERE.  And after you make some of these for yourself, be sure to send me a picture of your creation!  I'd love to see what you come up with!

I also wanted to let you know about a special that Stampin' Up! is running during the month of August.  Anyone who joins Stampin' Up! will get, in addition to their totally customizable kit items, this adorable project for FREE: 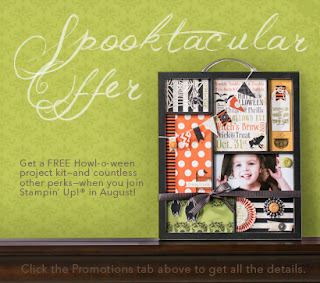 If anyone is keeping track, this is my third post with this set...

Since I gave it away in the blog title, you know that I'm going to be showing you card samples made with a stamp set that you've seen before.  But if I don't tell you what set it is, can you guess?  I'll give you a hint - it's in the 2012-2013 Stampin' Up! Idea Book & Catalog. 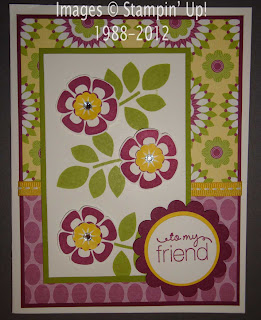 Here's another one created by my friend Cindy Westerink: 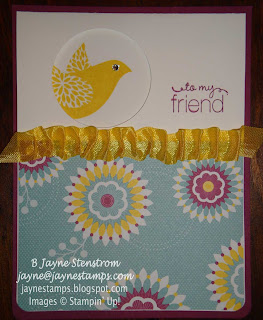 Well, I don't want to leave you hanging if you haven't guessed yet.

Okay, the stamp set is Betsy's Blossoms.  And both of the cards above use the Floral District Designer Series Paper and the same words set - Friendly Phrases.  They even both use Daffodil Delight ribbon and Basic Rhinestones.  (Honest, we didn't plan it that way.  We stamped them at entirely different times!  Promise!)  Quite different from one another, aren't they?  That's one of the things I love about Stampin' Up!s stamp sets - you can make a variety of cards using one stamp set - and not one of them has to look like any other one!

Let me know if you have any questions on these cards - or anything else you see posted on my blog.  Until next time...

I'm so excited to show you my project today - this has been a l-o-n-g time coming!

A dear friend of mine, Lou Ann Cruttenden, made these adorable letter blocks.  I just absolutely loved them and decided that I needed to make a set for myself.  I first saw pictures of her blocks back in February.  This was pretty much all I saw: 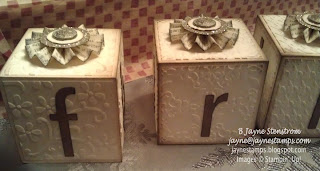 Then in March, the actual blocks were brought to a meeting and I was able to see them "live and in person", which was even better than the pictures!  So a few other demonstrators in the Chalk-a-holics group and I decided that we would get together and make these.

Well of course some time passed before we actually got together (I think it was in April), but we did gather one night and got started on our blocks.  Five sides of each block were covered with Very Vanilla card stock that had been embossed with a different Textured Impressions Embossing Folder for each block.  We also cut out the letters for the blocks, but that was basically as far as we got that day. 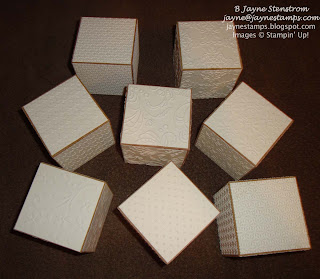 The blocks then languished in my closet for another couple of months before I finally got around to sponging all of the edges.  (I'm sure you've never done something like that, have you?) 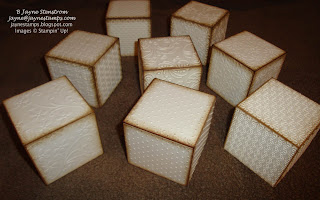 At this point I was determined that I was going to get them finished.  So when I had the opportunity to spend a couple of days stamping at our "mini convention", this was the project I brought to finish.  Once I got going, it didn't take much longer to finish the blocks.

The letters needed to be glued to the sides: 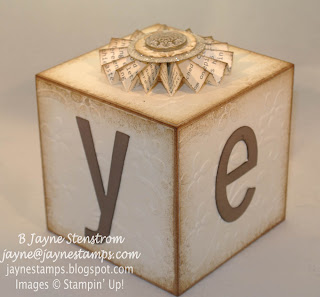 And the rosette for the tops needed to be made: 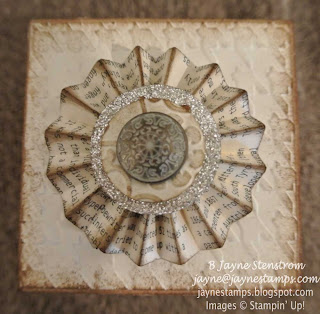 I had eight blocks total, but there were only seven used for letters, so I took the extra one and added some "seasonal embellishments" to the sides. 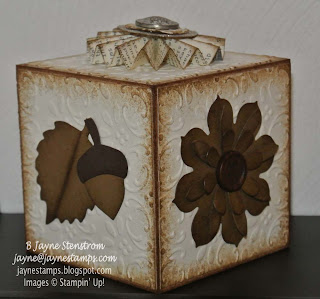 Finally!  They were complete!

Of course, I had to go buy a special shelf for them.

And here is a list of all of the words that they spell: 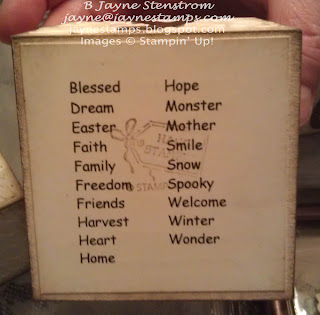 I was so pleased with how they turned out!  Of course, then I wondered why I let it take so long... but sometimes I think I appreciate things more when I've had to wait for them.  (Even if the waiting is because I'm procrastinating!)

I just finished making a cake for our dinner tomorrow after church.  It's called Missy's Peanut Butter Passion Cake.  It looks delicious and I can't wait to try it!  I really enjoy baking - I find it relaxing.  Unfortunately I also enjoy eating what I've baked!

But before I retire for the night, I wanted to show you cards made with the new stamp set Blooming with Kindness.  This is such a beautiful set and I absolutely love the sayings that coming in it - both what they say and the fonts used.  Gorgeous!

Some other demonstrators and I got together last weekend for a little "mini convention" here in our area.  Everyone who came brought a make-n-take project for the other attendees to make.  Here is what I brought for my project. I saw this card on another blog by Catherine Stockley and basically CASE-d it.  Isn't it pretty? 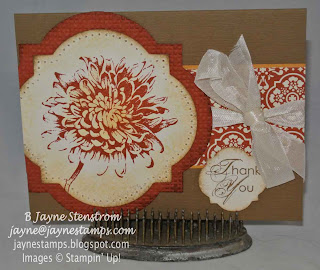 I loved the layout of the card, but I wanted to brighten it up a bit, so here's what we made at the Chalk-a-holics meeting last night. 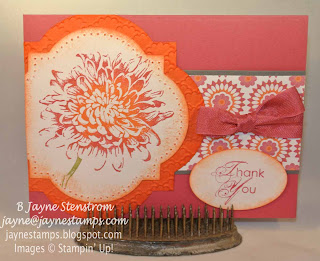 I love the bright and cheerful look of this card!  The color combination came from what was on the Floral District designer series paper.  Not a combination that I would normally choose, but I love it!

Here's hoping there's cake in your near future!