Today's cards all feature the Simple Stems stamp set found in the Occasions catalog.  This will be a fairly quick post as I need to head out the door for orchestra rehearsal.  This year we are playing in the pit for the "Sound of Music". 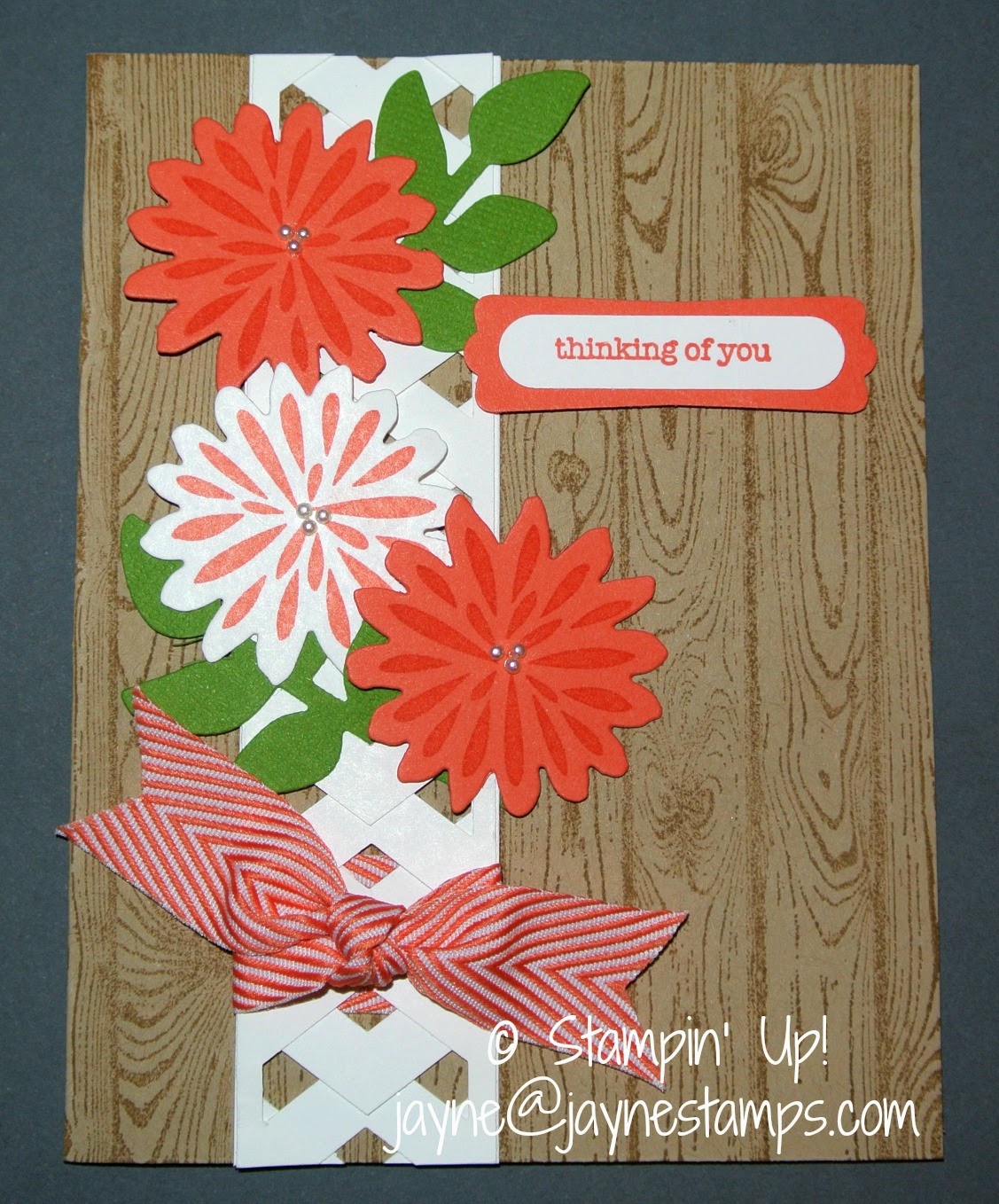 This card (shown in Tangerine Tango above and Strawberry Slush below) was from my
Wow! Cards Class and one of my clubs last month. 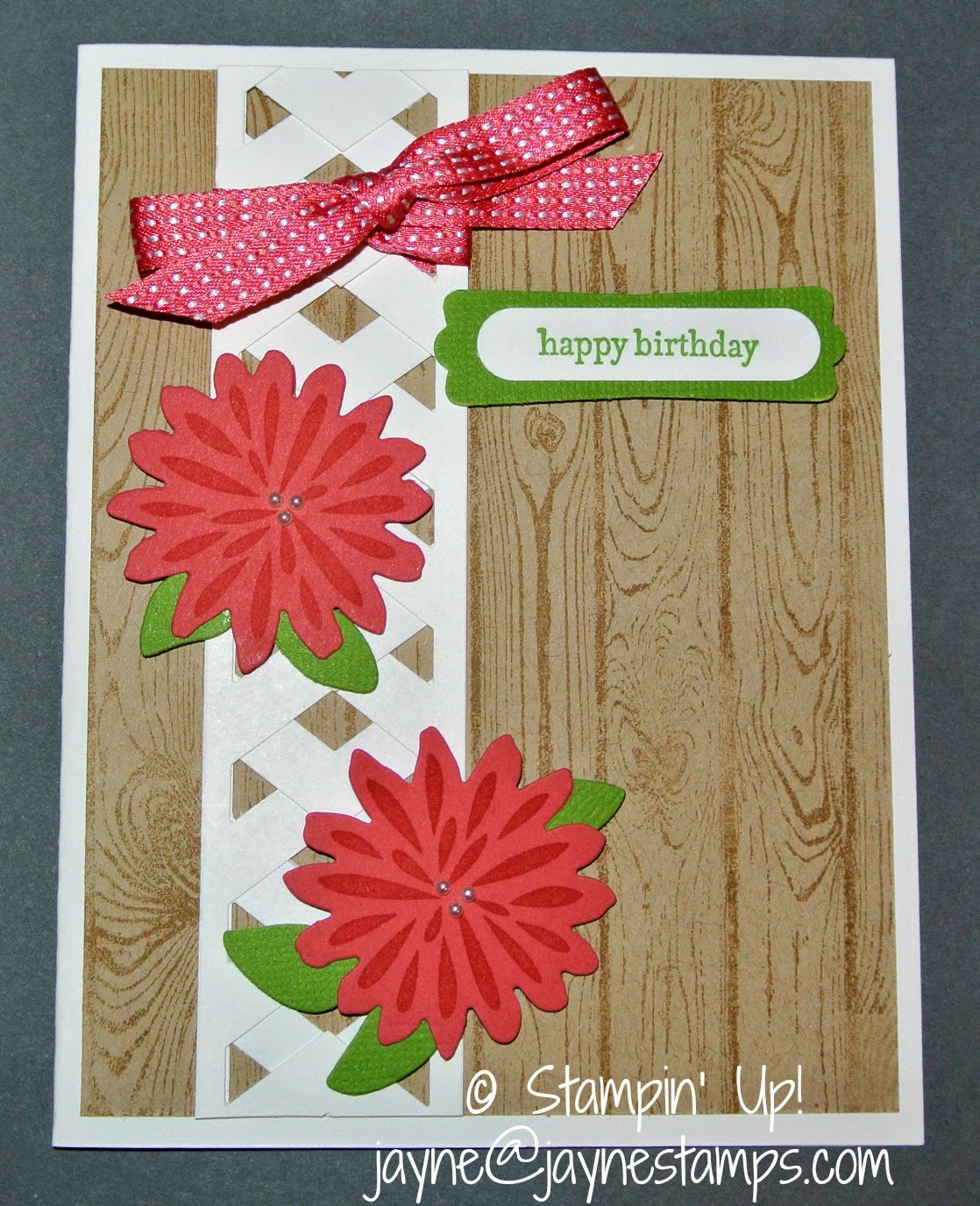 The trellis was made using the Chevron Border Punch.  How clever is that! 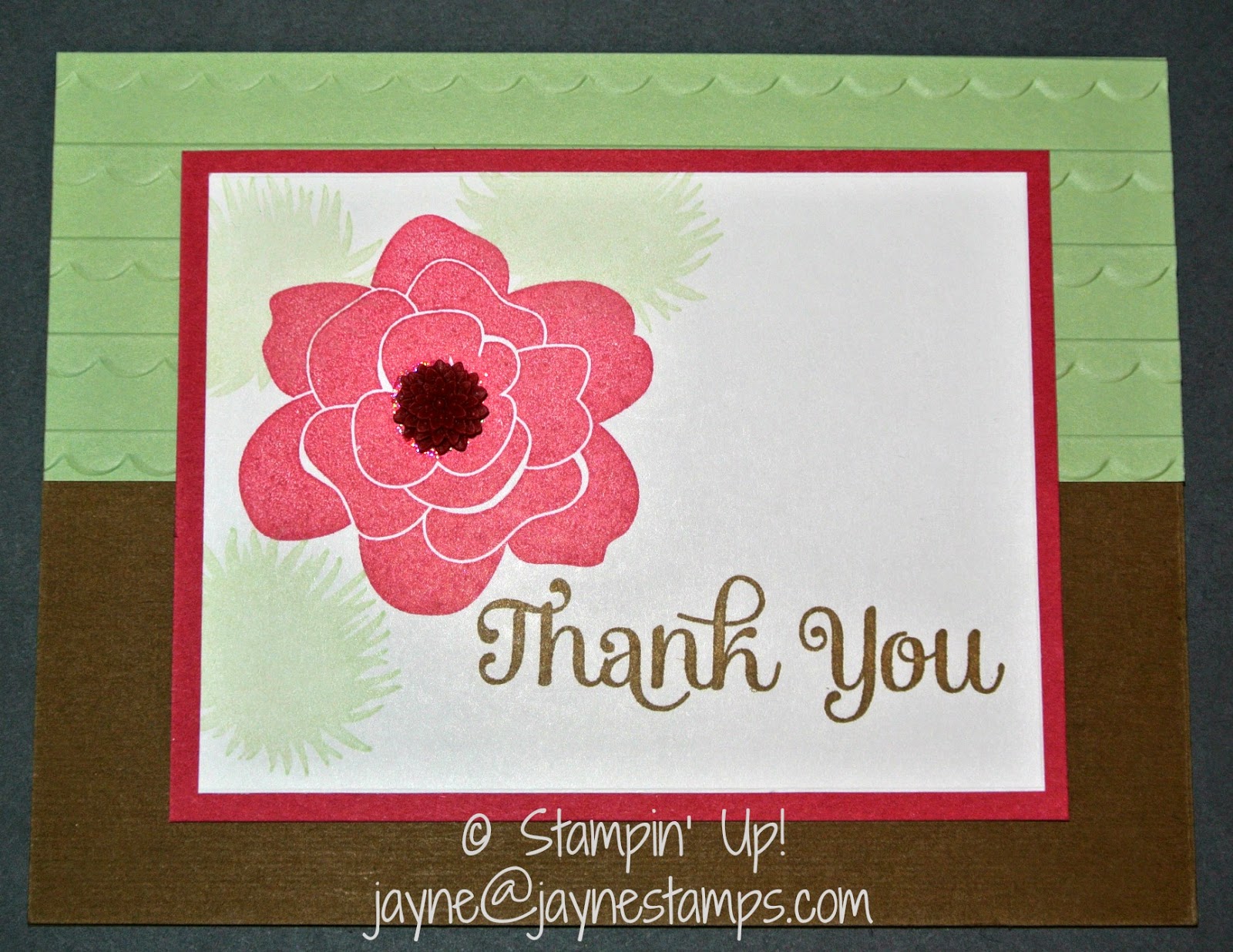 Quick and easy card we made at my Stamp-a-Stack class. 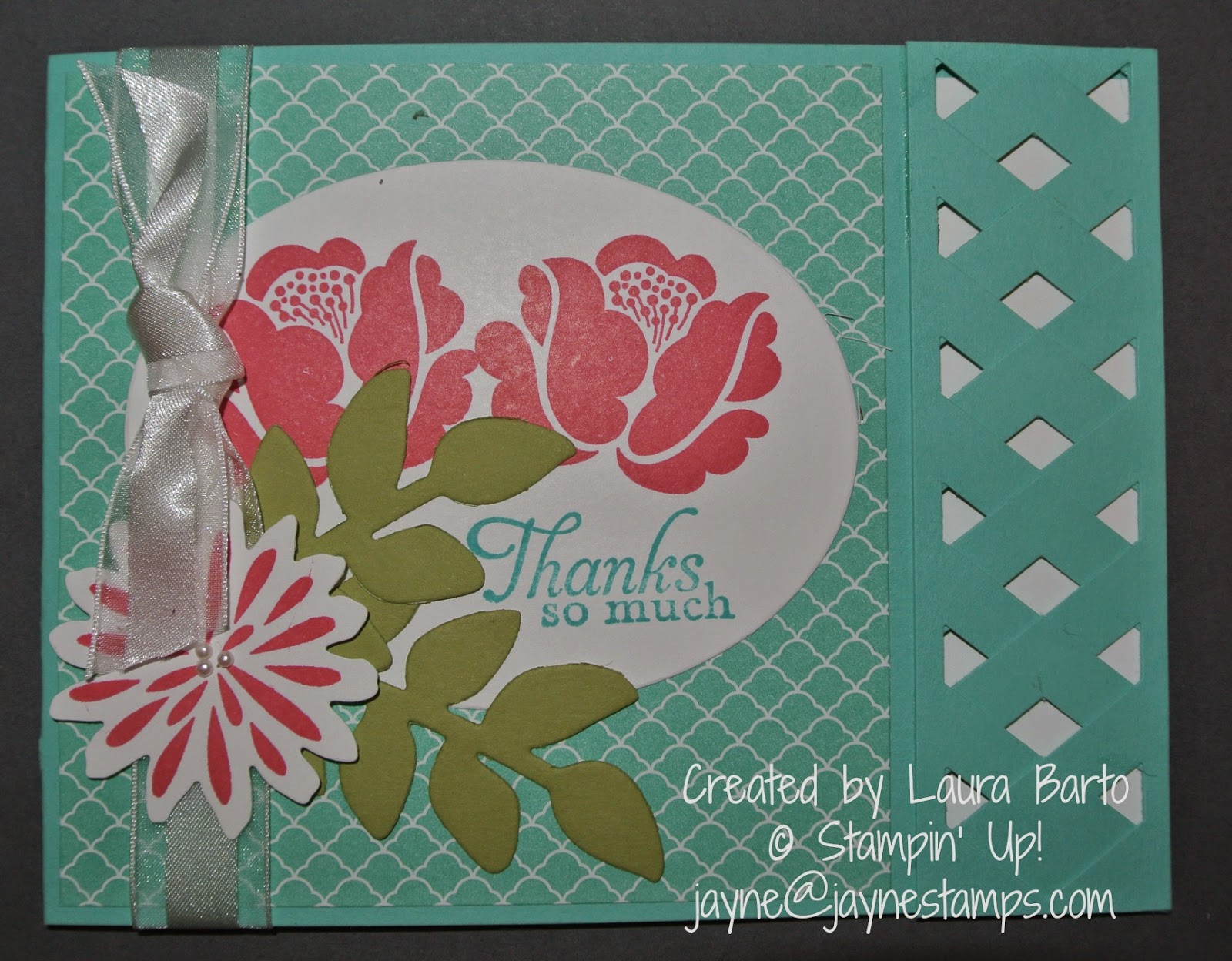 Laura Barto made this beautiful card. 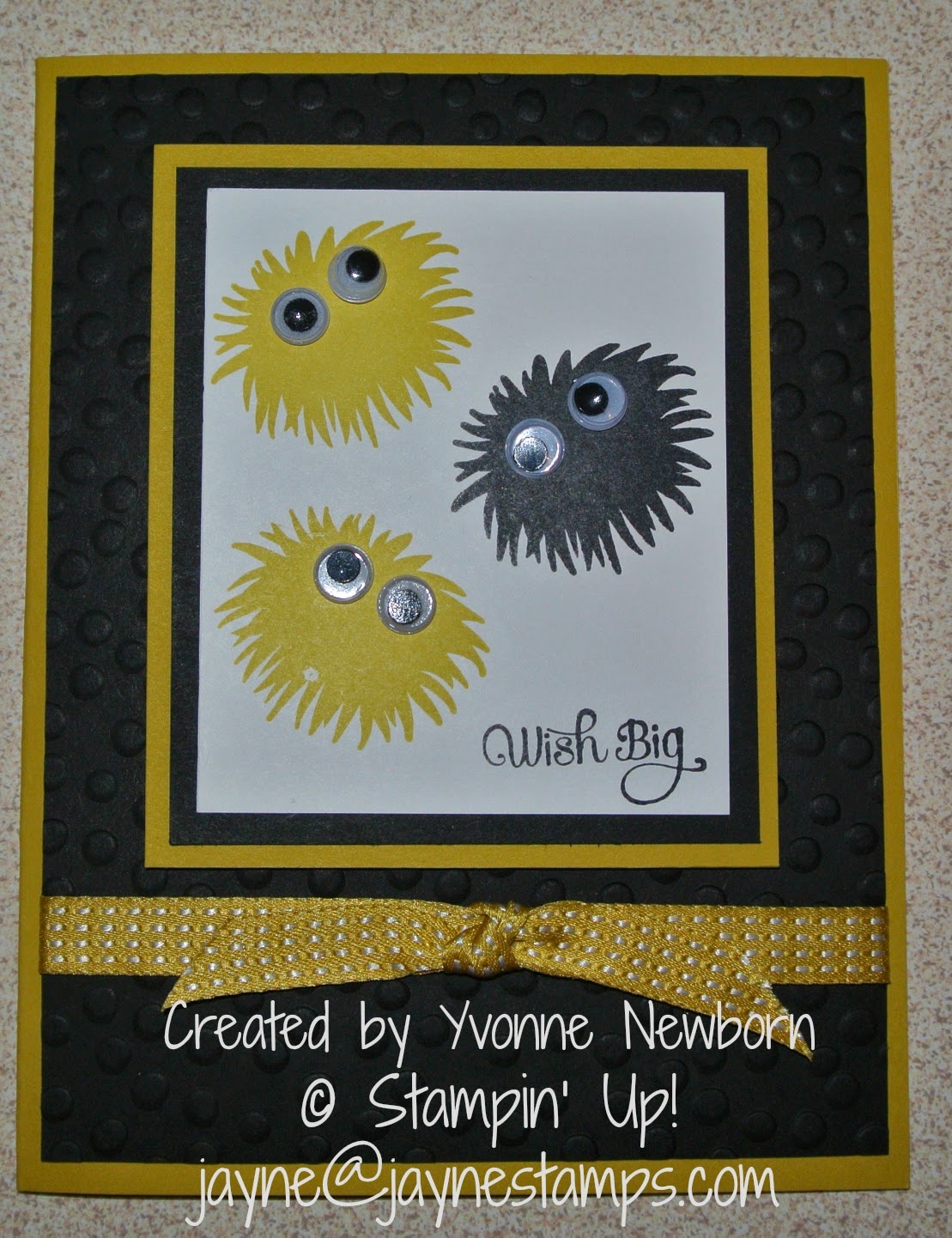 Yvonne Newborn made this cute card.  And yes, it really is made with a stamp from the Simple Stems set! 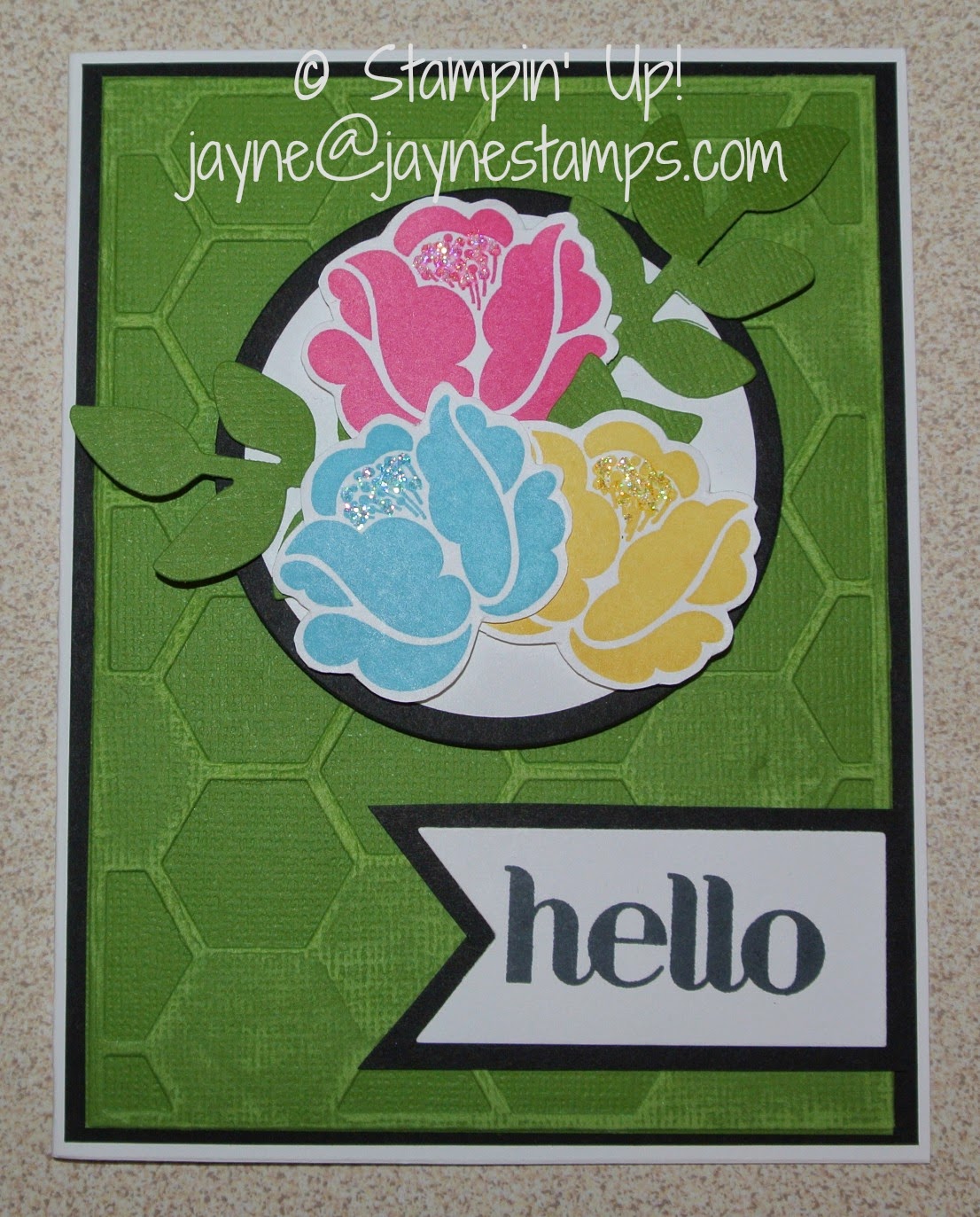 This was my card for a recent swap.  The Core'dinations paper is retiring.  I'm going to miss it!

If you have any questions about the cards above, feel free to contact me.  I'll be back when I can!
Until next time...

FREE SHIPPING on any size order* this week, April 21-25


If you have ANY trouble putting in your order you can email me and I will be happy to help!!
jayne@jaynestamps.com

Get FREE shipping on everything (excluding expedited orders) April 21-25! The lists of retiring products will also be available on April 21, so you can take advantage of free shipping by ordering all your favorites right away! Once the retired list comes out, products on it will only be available while supplies last (including stamp sets), so don't wait to get your order in!

The colors shown below will be retiring this year.  They are from the 2012-2014 In-Color Collection and include Gumball Green, Midnight Muse, Primrose Petals, Raspberry Ripple, and Summer Starfruit.  If you want any of the products available in these colors, I would HIGHLY suggest that you order them soon.  I have the feeling that they will sell out quickly when the retired list is published. 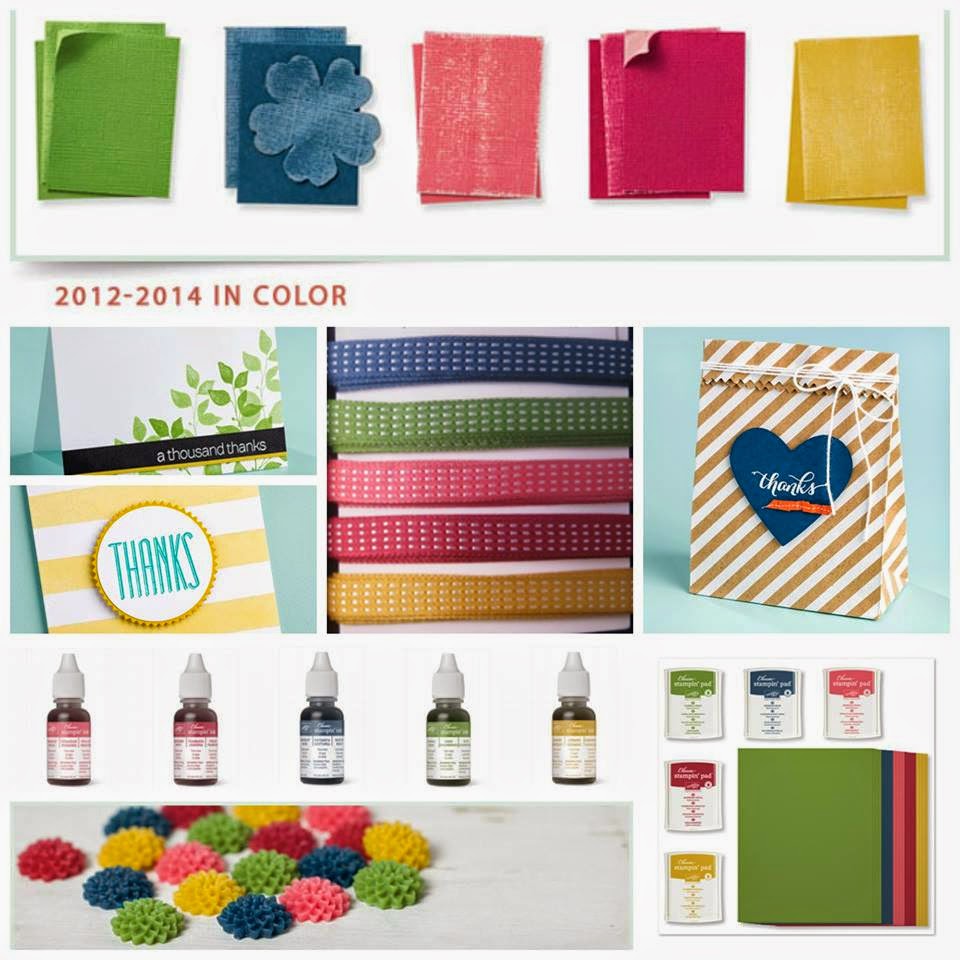 Now, on to the stamping project for today.  The instructions for this set came from Craft Project Central.  It's a great place to get beautiful projects.  Go check it out! You won't be disappointed.

Did you get the "Good as Gold" Card Kit as one of your free Sale-a-bration items?  If you missed out, I think you're going to wish you had after you see this project.

First off is the box made using the Envelope Punch Board.  Yes, you CAN make more than just envelopes with that versatile tool.  I love mine! 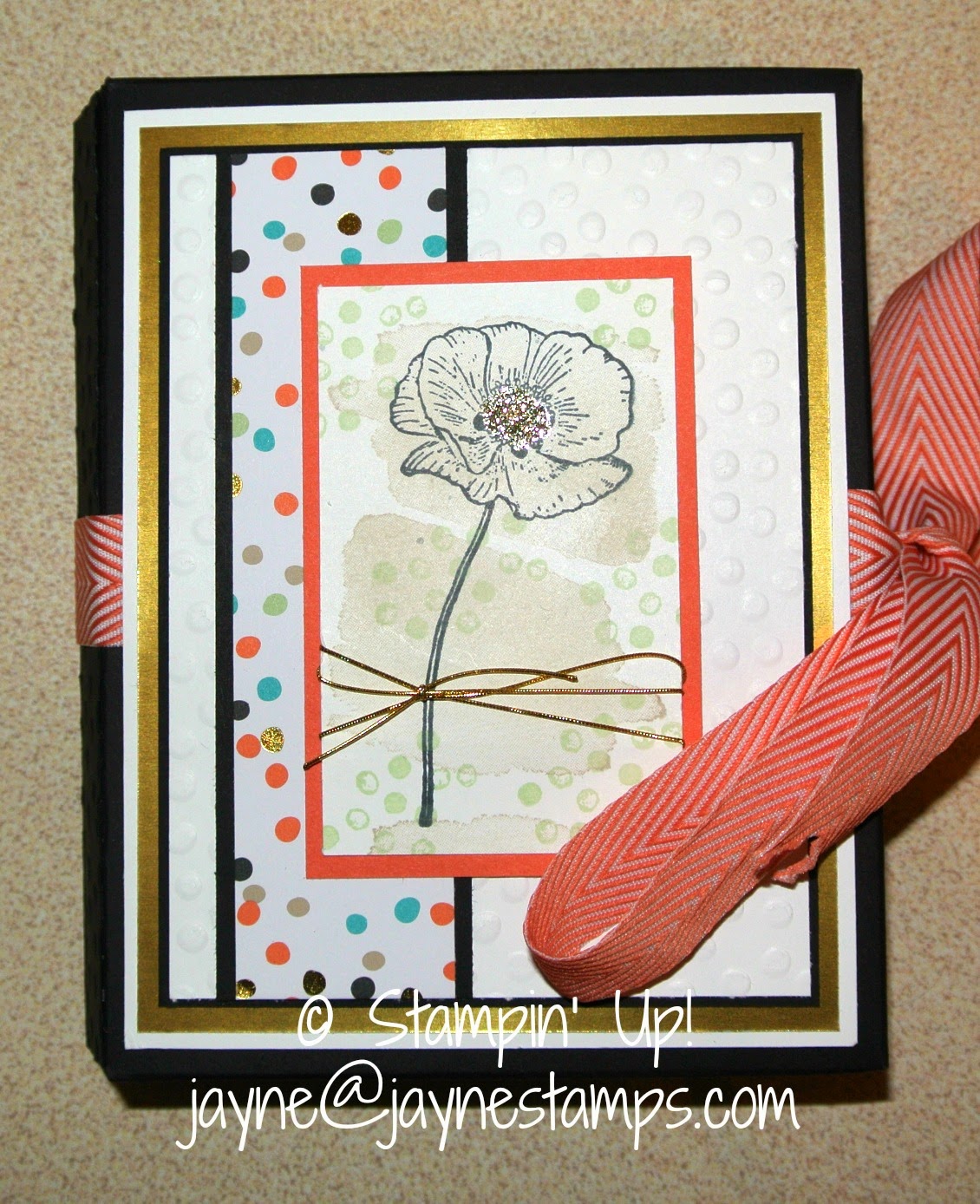 This is the inside of the box.  There are four cards inside. 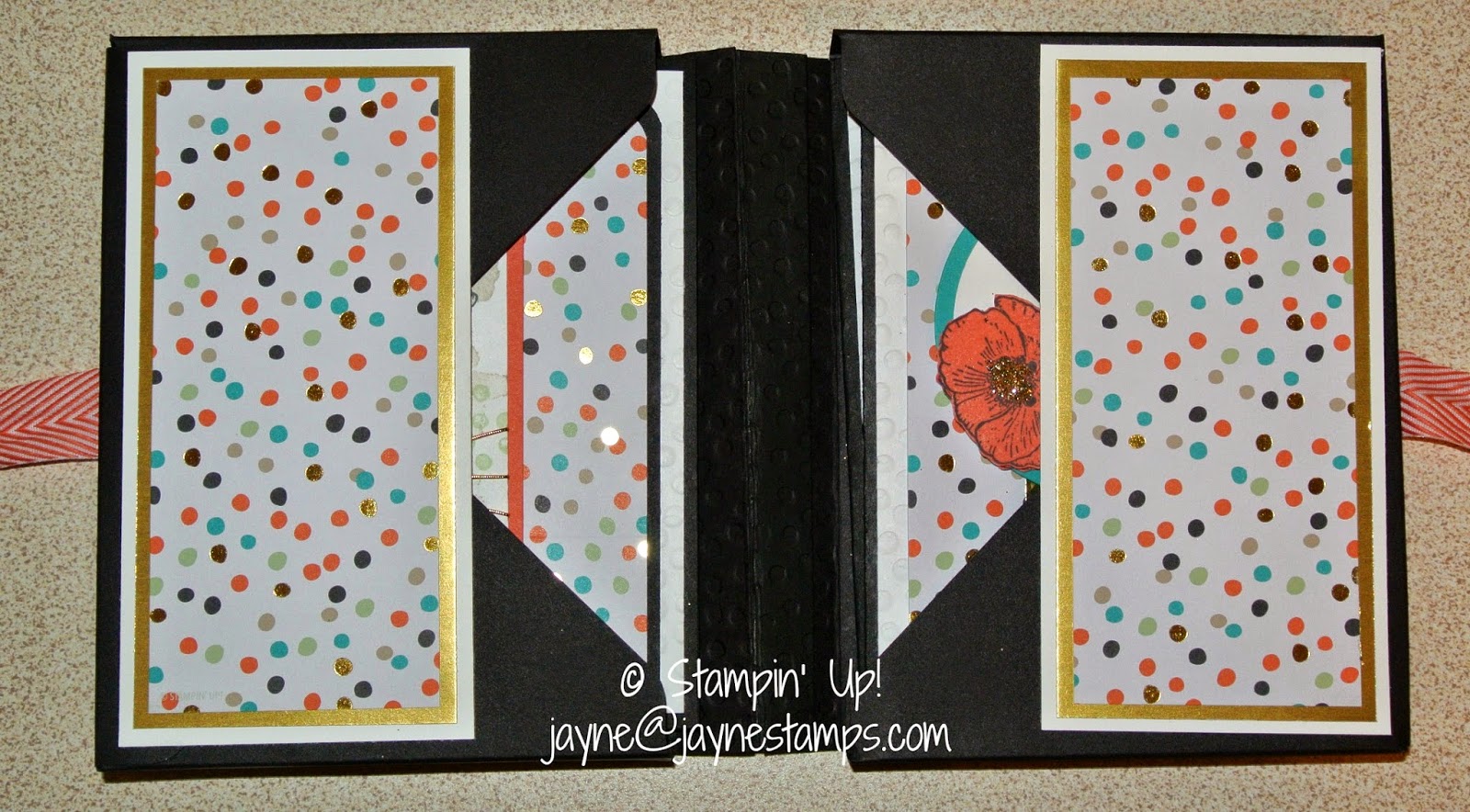 And here are the cards, made with the Happy Watercolor stamp set and items from the Good as Gold Card Kit. 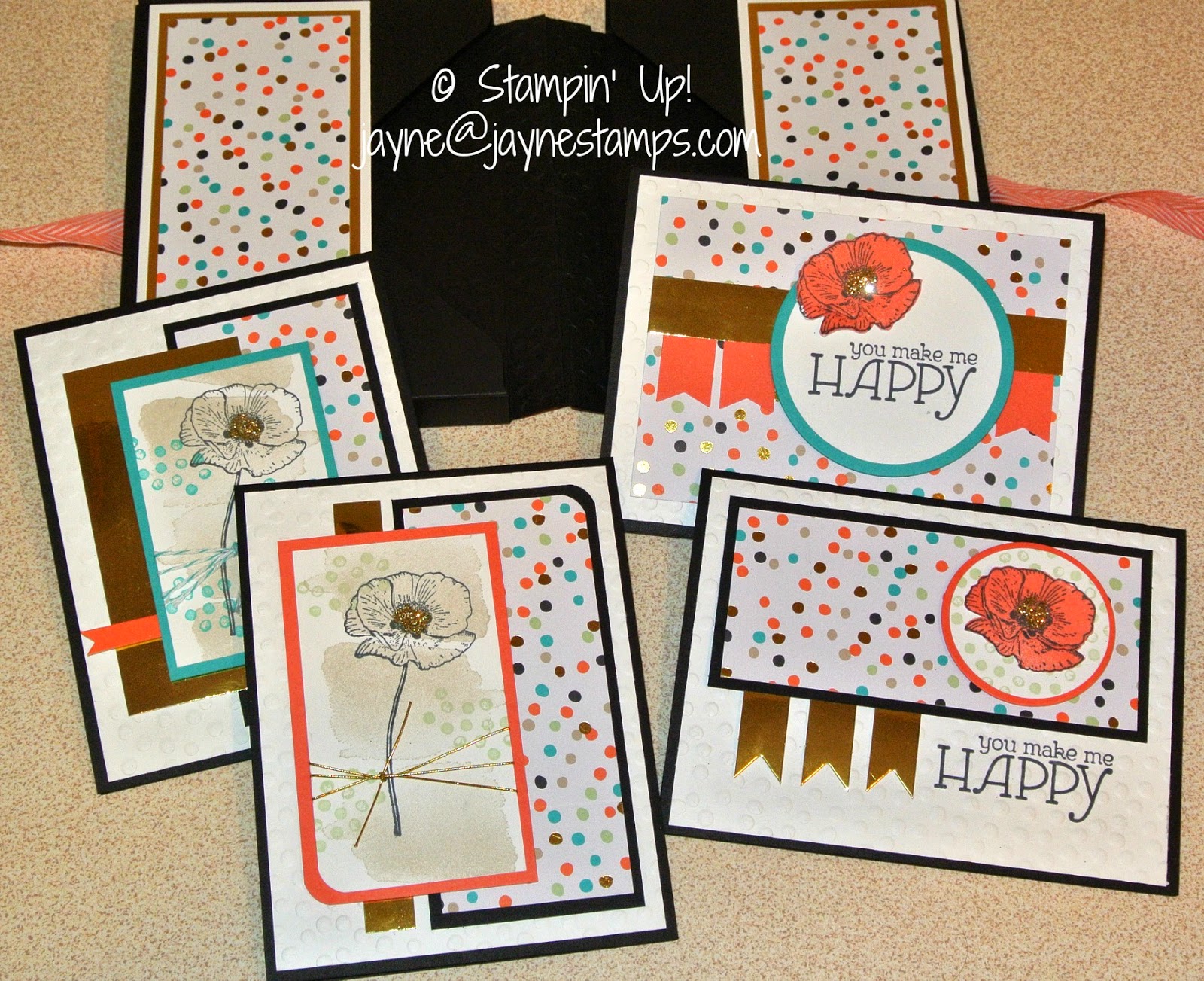 I love this set of cards and matching box!  There's enough of the decorative cardstock and other items in the kit for me to make another set too!  Hmmm... I wonder who would like something like this?

Sending you wishes for a blessed Easter.

I had mentioned before that I am teaching some Continuing Education Stamping Classes this year.  It's been fun to meet new people and get a chance to stamp with them.

The last class we did showed embossing plus a couple of easy techniques that take a card up a notch.  Here are the cards that we made at that class.

The first one was made with the Everything Eleanor stamp set.  I got the idea from my friend Sara Bolz.  We cut out the flower and added Dazzling Diamonds glitter to the center stamens (it's hard to see in the picture).  We also added some texture with the Adorning Accents Embossing Folder (the hearts).  Even though the card is basically monochromatic, just adding those extra touches stepped it up a bit. 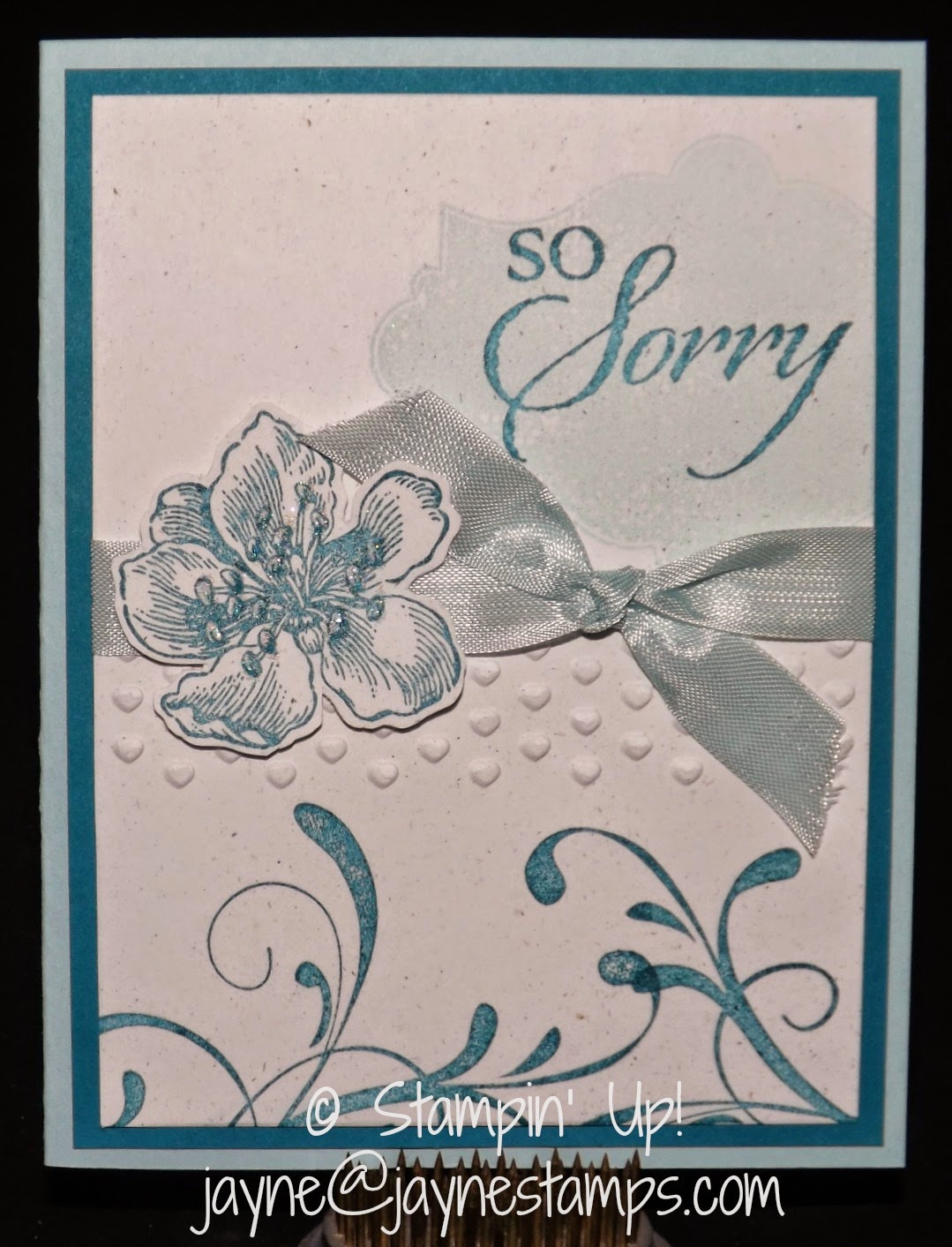 The second card used Designer Series Paper, the Scallops TIEF,  See Ya Later Sale-a-bration stamp set, and Silver Foil Sheets.  The main image was stamped in Craft Black ink and embossed with Clear embossing powder.  We then cut that out with the Ovals Collection Framelits. 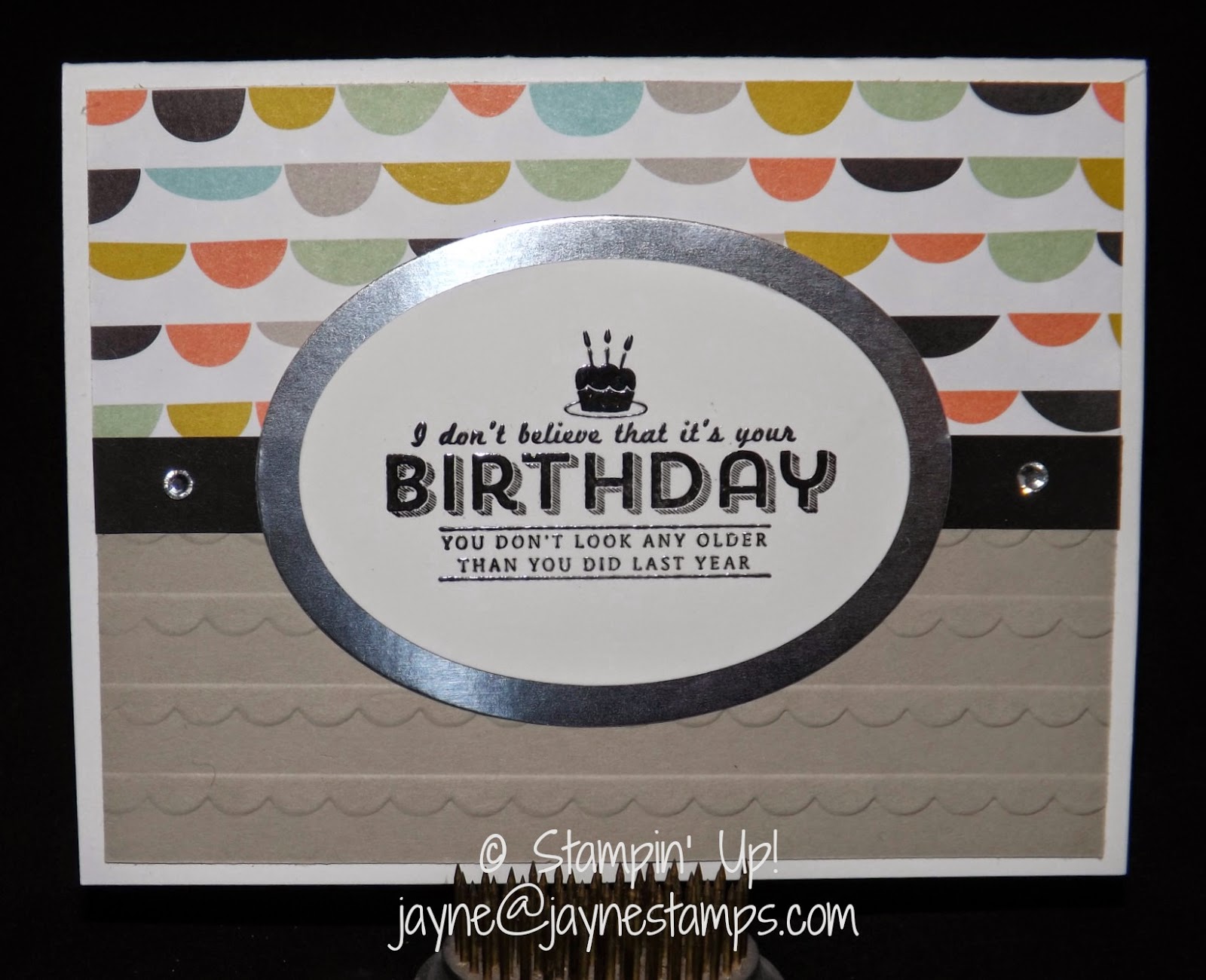 I then showed the ladies how to do Triple Time Stamping.  This is one of those techniques that is really so easy to do, but creates such a wow factor!  The stamp set used was Creative Elements with Petite Pairs for the saying.  It's stamped in Cherry Cobbler on Very Vanilla cardstock.  We added some Crumb Cake Taffeta Ribbon for a little extra touch.  I think this was everyone's favorite technique of the night! 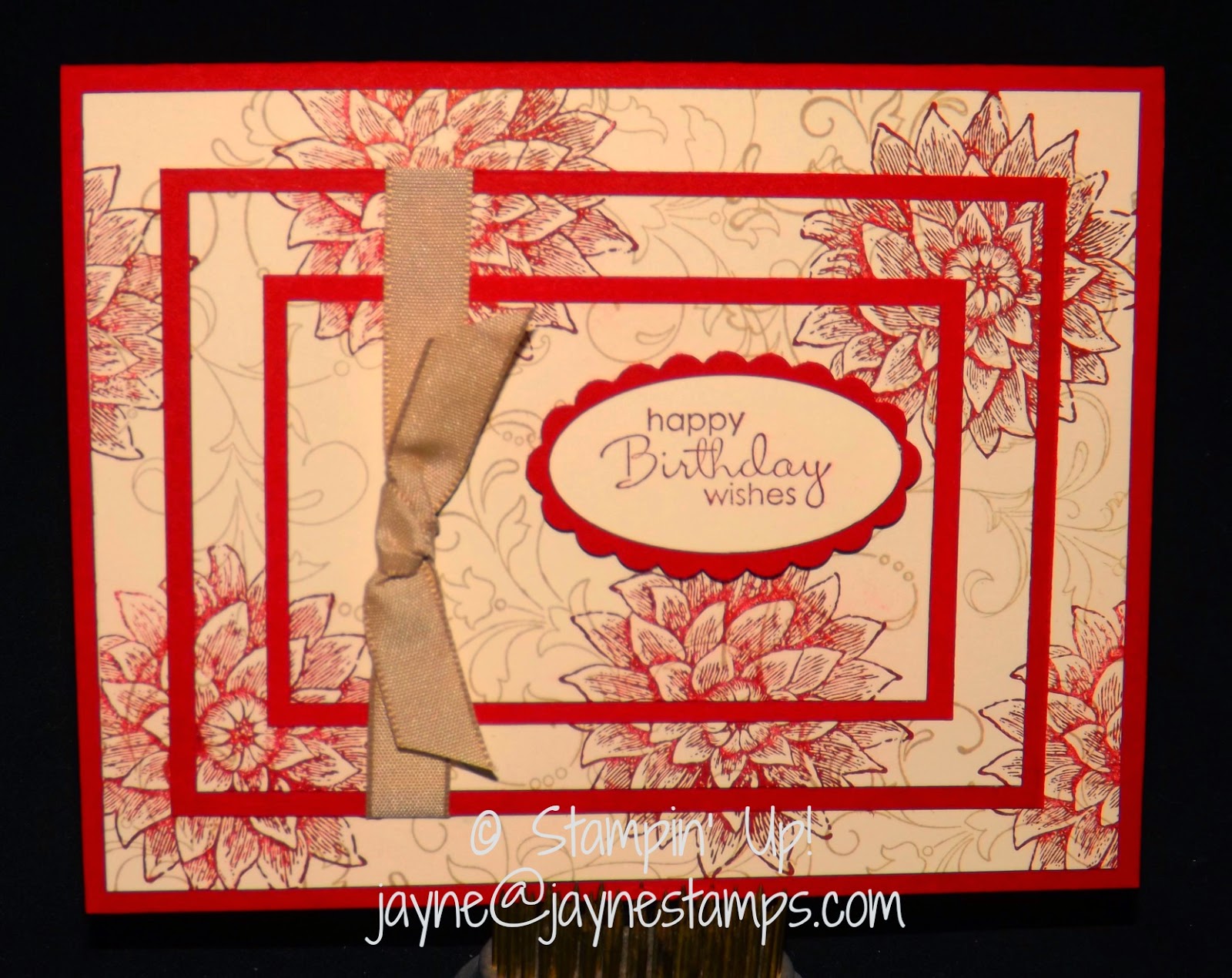 The last card was one I made at a lot of my classes that month!  The technique was paper-piecing with the Another Great Year stamp set.  The image was embossed with Silver emboss powder and the Kaleidoscope DSP was used for the colors. 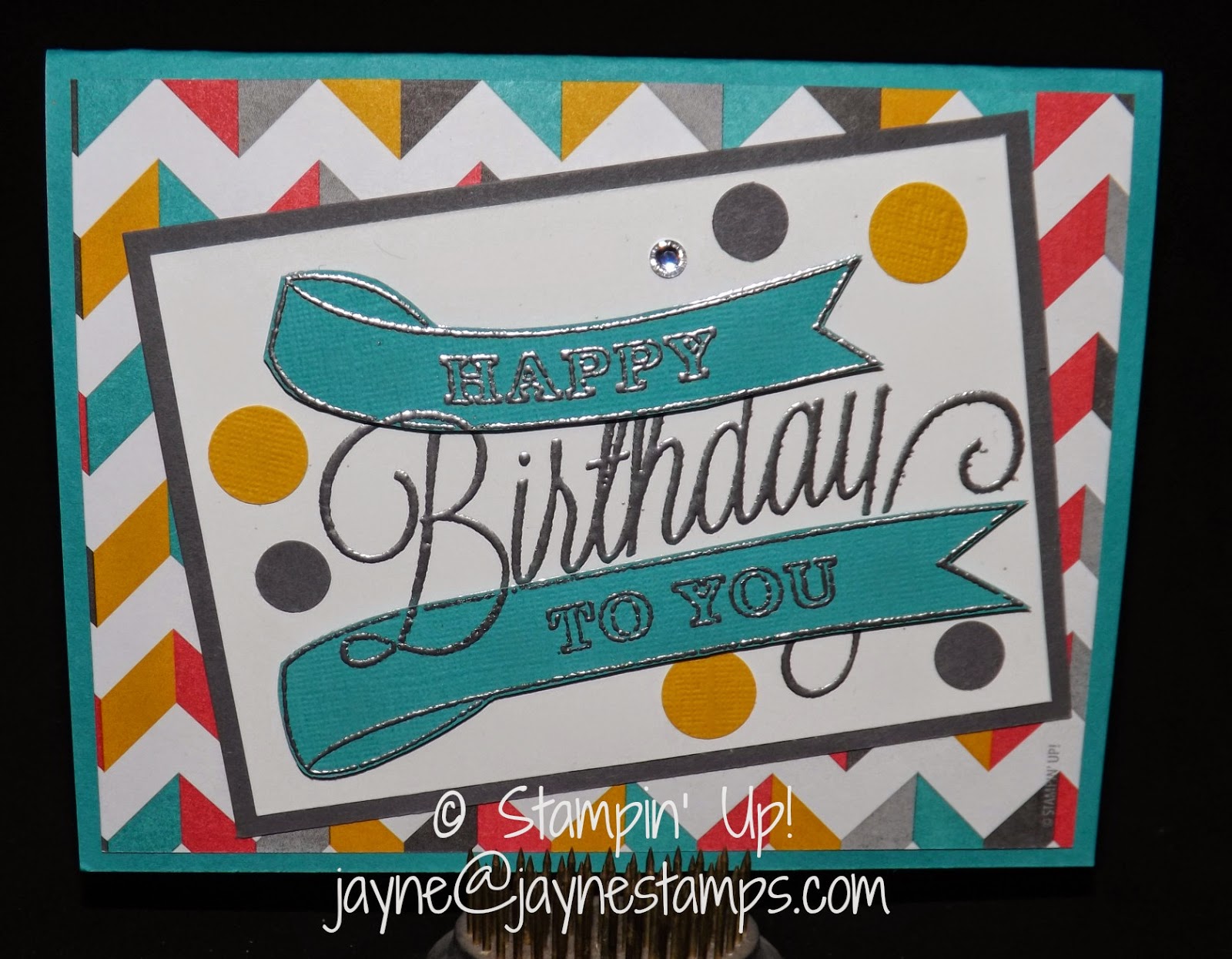 I have had a great time teaching these classes so far.  There's only one more to go this year - on April 23.  But so far they've been a success, so maybe I'll be teaching some more next year!  Until next time... 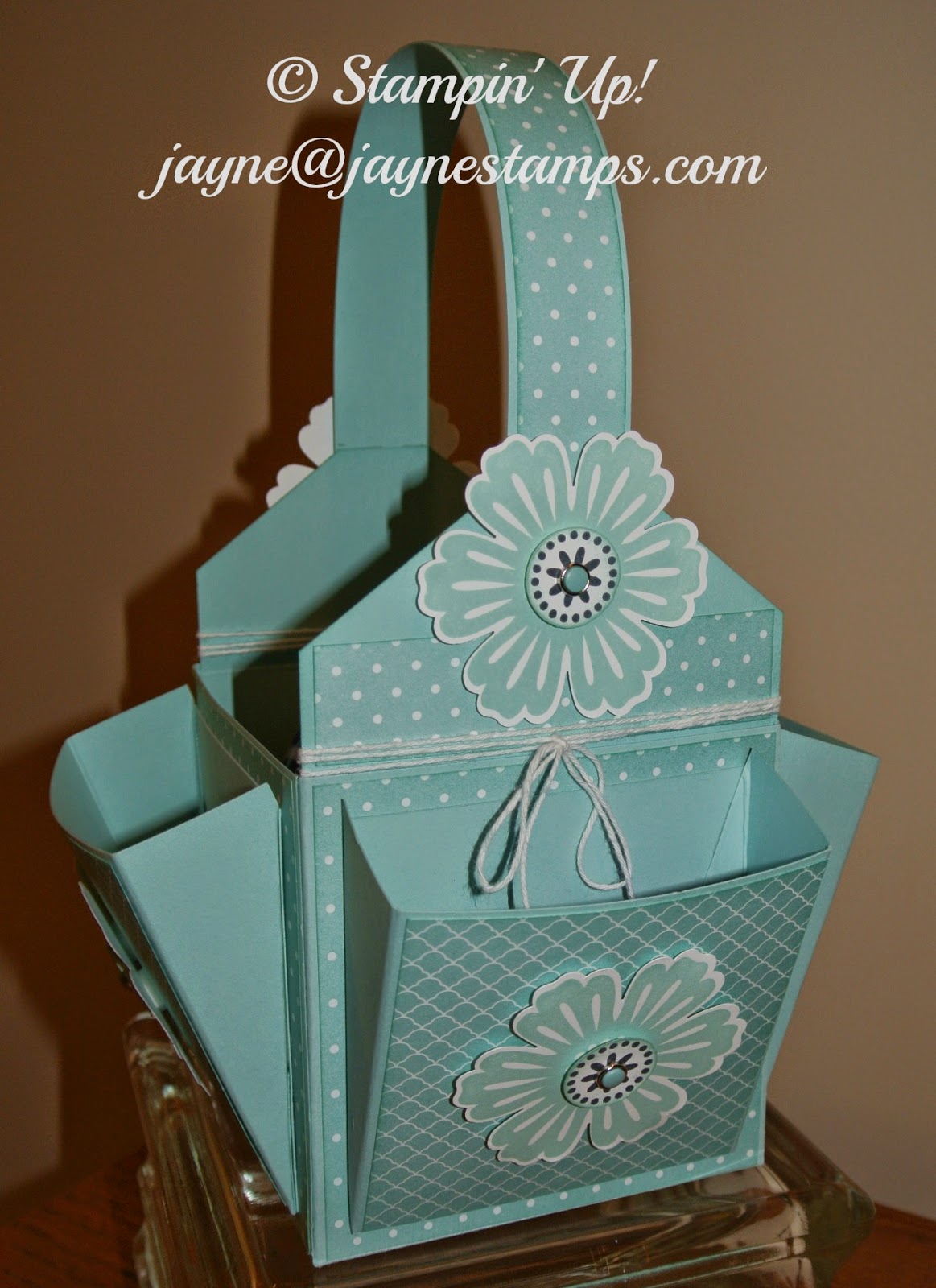 Would you be interested in making this basket with pockets?  I have had a LOT of interest in these baskets since I first posted them over a year ago (or was it two?).

I am offering a class to make this next Thursday, April 17 at 6:30 PM.  Cost is $20.  You can choose the color you want to use from the Subtles Collection - first come, first served, as I have a limited amount of colors available.

For this class you will NEED to bring Sticky Strip and with another kind of tape like SNAIL, some kind of Simply Scored board (or something that will score 12" paper and card stock), paper trimmer, and scissors.

This class will work best if everyone is here to start at the same time so I can talk you through each step.

RSVP with payment by next Tuesday to reserve your spot and select your color. 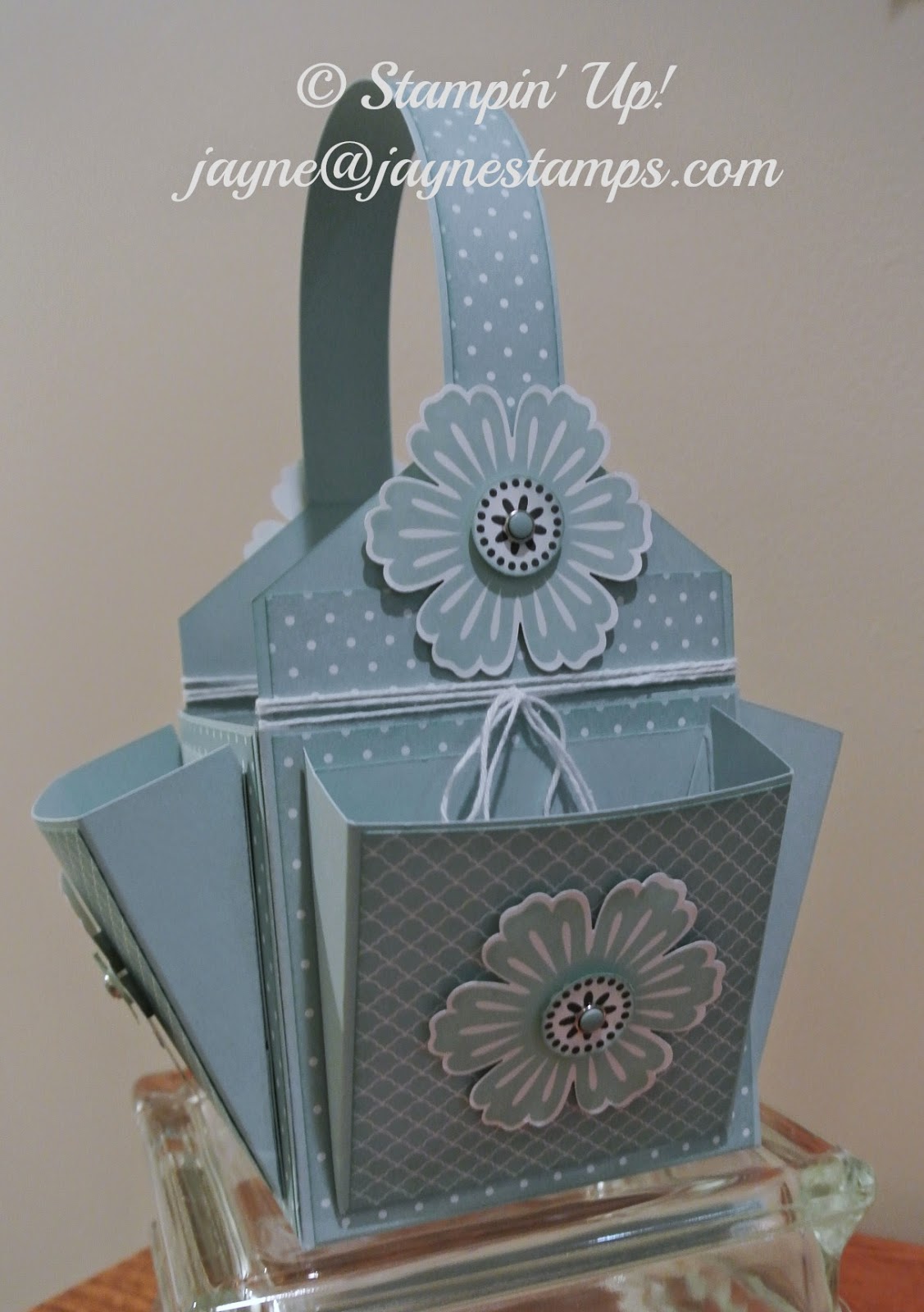 ADDED:  For those of you who can't make it to class, but are interested in the tutorial, you can get it at http://inkingfromtheheart.blogspot.com/2014/04/is-sooo-good-to-be-back-with-cards-more.html

One of my favorite bundles in the Occasions Catalog is the Petite Petals stamp set and coordinating Petite Petals Punch.  And judging by the number of cards and other projects I see made with them, I'm not the only one!

Here are just a couple of cards that use this cute combo. 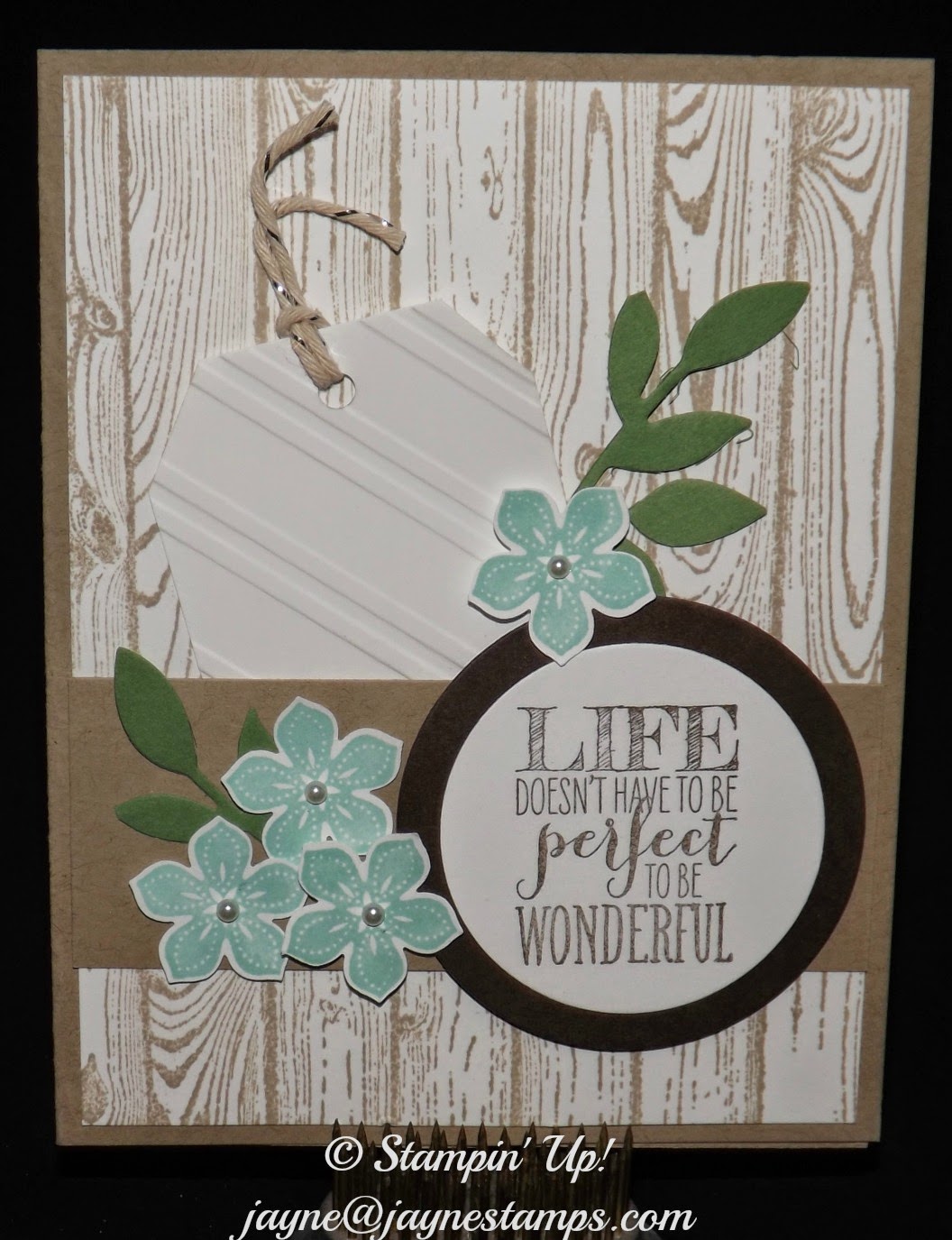 This one we made at my downline meeting.  It uses the Hardwood background stamp, Angled Tag Topper Punch, Perfect Pennants stamp set, and Silver Baker's Twine from the Occasions Catalog. 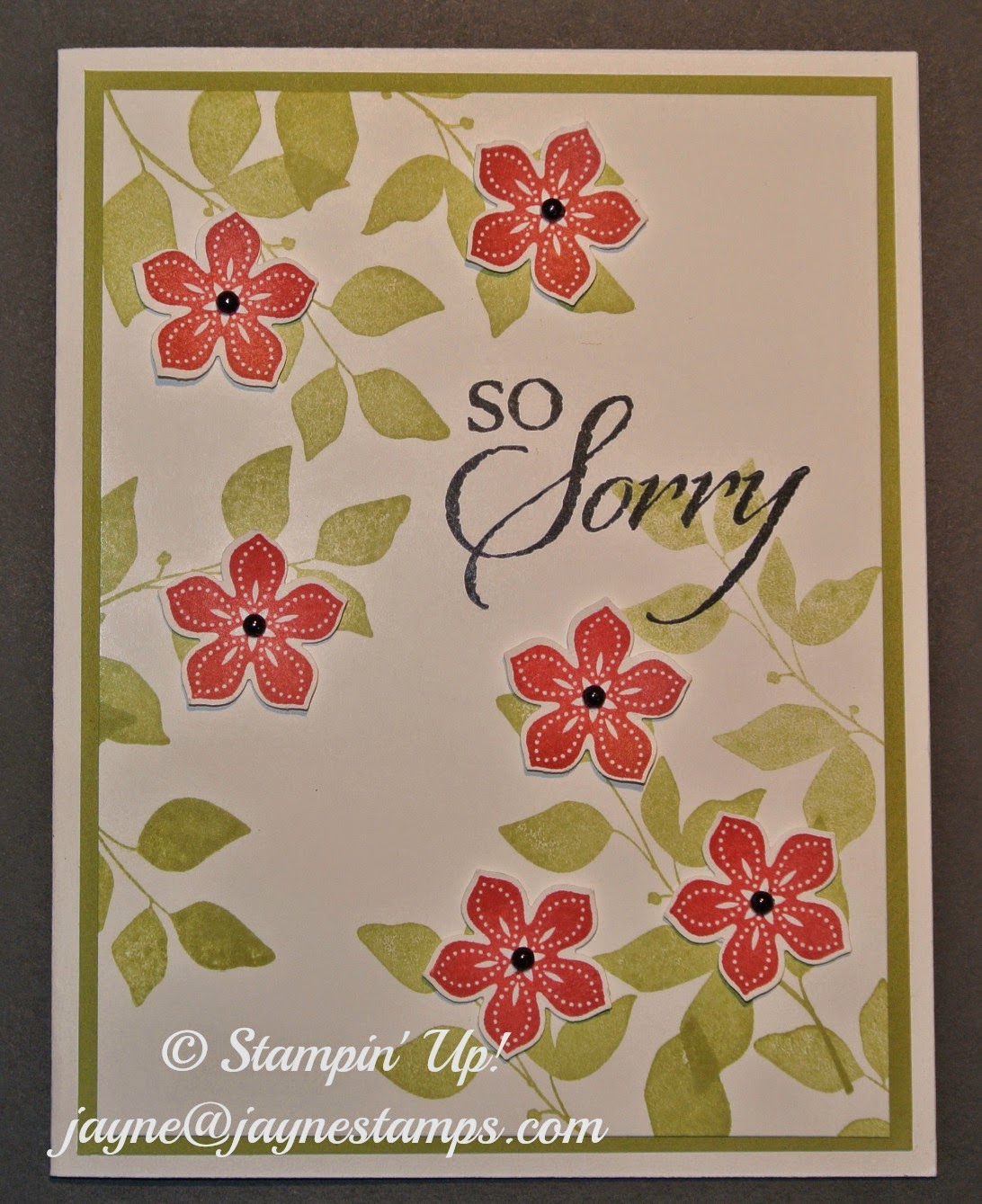 This one was made at one of my stamp clubs.  The leaf is from Summer Silhouettes.  The centers in the flowers are pearls that are colored black with a Sharpie Marker.

Now that it's April, I'm starting to think that we might even see some flowers like this outside in our yard!