I made this card about a week ago for my daughter's boyfriend, Jared, but I've had to wait to show you until after his birthday - and after I'd given him the card! He was pretty impressed with it - which made me pleased! 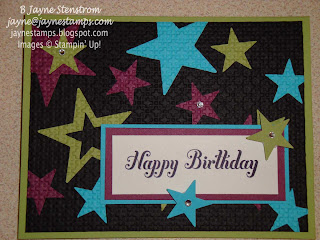 The stars are punched from Tempting Turquoise, Rich Razzleberry, and Certainly Celery card stock. I added just a few Basic Rhinestones for a little touch of sparkle.

And here's the happy guy with his card! (He's such a ham!) Happy birthday, Jared! 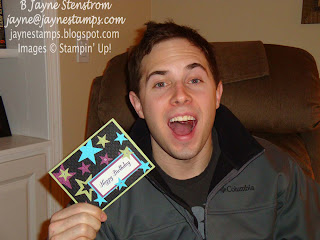 Posted by Jayne Stenstrom at 4:24 PM