A couple of weeks ago I went to something called the "Michigan Mingle".  It's a group of ladies who met on Splitcoast Stampers, and when they discovered how much they enjoyed "chatting" on-line, they decided to meet in person!  I think this was about 5-6 years ago (although I could be wrong on the time).  This year I went for the first time, but not the last!  My friend Debra told me I should go.  She's gone before and told me it would be a lot of fun - and it was!

Besides stamping, eating, chatting, and getting to know everyone, there were also door prizes, "mojo" prizes, and "prizes of UNSPEAKABLE VALUE"... 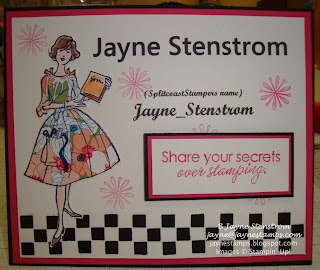 Every one of those little black checks is a 1/4" square punched from black cardstock.  Let's hear it for 2-Way Glue pens and tweezers!  The stamp set is a retired one from Stampin' Up! a few years back.

Every table had a glass like this filled with ribbon and other treasures, and each table's glass was a different color.  I wish I had taken pictures of some of the other ones, but I only took the one on our table.

This was what I made for my "Mojo Project".  The idea was to have something with a value of $10-$15 with some stamping/paper crafting and include a new package of your favorite crafting item that you USED on your project along with your favorite snack to have while crafting.  Of course, my snack was M&Ms. 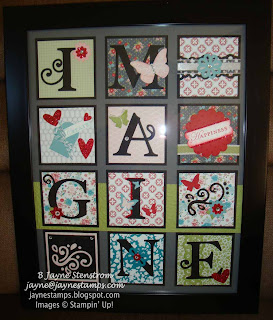 Now, I'm assuming that you can tell what the sign says, right?  "IMAGINE".  I was showing it to my hubby before I left and he started to read out loud, "I'm A Guinee..."  Right.  I told him I just forgot to put the word "pig" at the end.  Ha!

Those who participated in the Mojo Project had their names put in a basket and then they pulled the names randomly and we were allowed to go pick out what we wanted.  I was picked second and was able to choose this gorgeous display board made by Kim with some of the Stampin' Up! Twitterpated Designer Fabric and Blushing Bride 3/8" Pleated Satin Ribbon.  This is everything that came in my gift.  (The Kit Kat bar is gone - I'm an equal opportunity chocolate eater.) 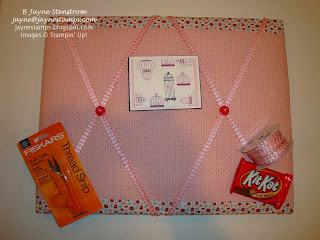 And here it is up on my wall with some cards on it for display.  Isn't it pretty?  And practical too! 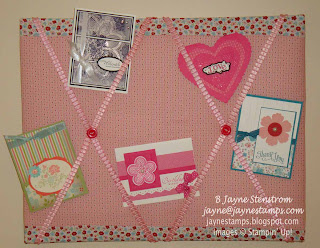 I don't think I've shown you my roommate gift from Debra.  She made this adorable purse with the Summer Smooches Fabric.  The Summer Smooches products are available for purchase in April, but if you don't get them before the month ends, you'll have to wait until the new catalog comes out June 1.  I don't know about you, but I don't like to have to wait! 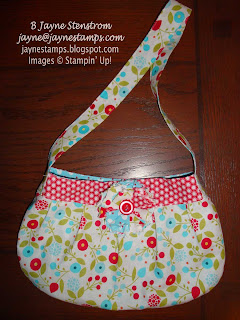 My gift for Debra was this mini album.  More pictures are shown HERE. 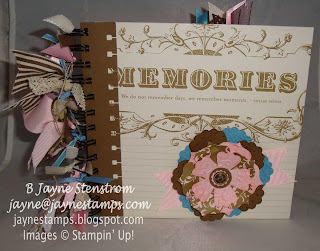 And there were door prizes too!  Everyone received a certain amount of tickets which we could put in a basket in front of whatever prize we were interested in.  We could also purchase additional tickets if we wanted.  I was so thrilled to have my name called for this wonderful ribbon carousel! 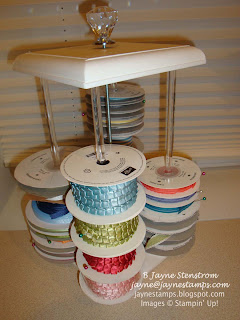 I even got some stamping accomplished that weekend!  I made my card for my Upscale Swap Group and I made the Easter Cottage I showed you on this post.  Stamping, chatting, eating, fun - what more could a girl want?  Oh yes, we did do a little shopping.  But the best thing was the new friends that I made!  I'm already looking forward to the Mingle next year!

Posted by Jayne Stenstrom at 10:10 PM