Last night we had a Chalk-a-Holics meeting at my house. The Chalk-a-Holics is the name of my Stampin' Up! group... and the name is sort of a play on words. Since I LOVE chocolate (who doesn't?), I wanted a name that referred to that, but I also wanted something that referred to stamping. Not too many years ago the Stampin' Pastels were simply called chalks, so hence the name.

Anyway, we usually have a few cards to make at the meetings, so I thought I would share those with you. Later on I'll share the cards that the ladies brought to swap. 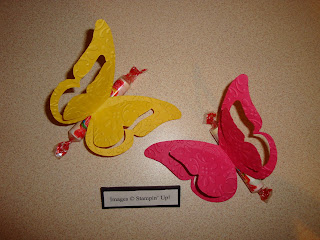 Aren't these butterflies adorable? My friend Helen Owens showed these to us on Monday night. These were made with the SU! Beautiful Butterflies Bigz die and the Finial Press Textured Impressions Embossing Folder. One is made with Daffodil Delight cardstock (a new color!) and the other is made with Melon Mambo cardstock. Helen had hers attached to a small Spree twist, but since I couldn't find those around right now, I just used Smarties. The butterfly is attached with Mini Glue Dots. Cute and simple! 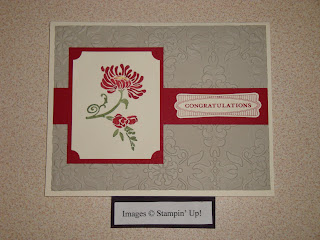 This card was actually one that we made at my open house on Saturday. It uses a lot of new things from the new catalog! The flower is from the "Friends Never Fade" stamp set and was inked up with markers in Daffodil Delight, Cherry Cobbler, and Always Artichoke. That was stamped on Very Vanilla cardstock and layered on Cherry Cobbler CS and the corners were punched with the Small Ticket Corner punch. The congratulations is from another new stamp set - "Perfect Punches" I just LOVE the fact that Stampin' Up! makes so many sets that coordinate perfectly with our punches! Even though I love cutting things out by hand, I know that not everybody does, so this little extra touch makes it easy to make great cards quickly and easily! The punch used for the congratulations was the Modern Label Extra-Large punch. The background of the card is Sahara Sand CS run through the Big Shot with the Vintage Wallpaper Textured Impressions Embossing Folder (another new item) and the whole thing is layered onto Very Vanilla CS for the actual card. This idea was actually copied from another card I saw somewhere - probably on the Late Night Stampers group that I'm a member of. 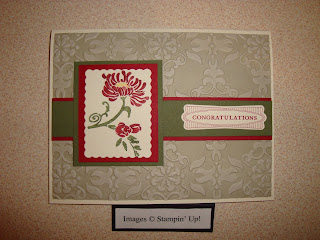 This card is basically the same as the one above, but I tried a few other ideas on it. On this one, I inked up the Vintage Wallpaper Embossing Folder with Sahara Sand before running the cardstock through the Big Shot. You can see the extra depth that gives the card. I also cut out the flower with the Scallop Rectangle Clearlits (another new item) - you are going to LOVE this little die! It's clear so you can line up your stamped image, a portion of a picture, or whatever and see exactly where it's going to cut it out! I added some additional Always Artichoke cardstock layers to make it "pop" a little more. Two great cards from one idea! 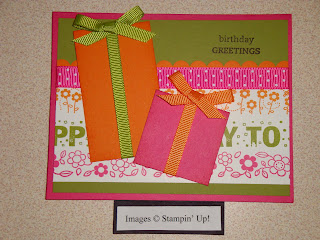 The last card we made was a CASE from Gretchen Barron. (I love her blog - she has some of the best ideas!) It uses the new Builder Wheels "Posy Party", "Birthday", and "Bees & Blossoms" (in the current mini catalog but also in the new big Idea Book & Catalog). The triple cell cartridge is inked with Melon Mambo, Old Olive, and Pumpkin Pie inks. Also used on the card is "On Your Birthday", the Scallop Edge Border punch, Old Olive and Pumpkin Pie 1/4" grosgrain ribbon, and retiring Melon Mambo polka-dot ribbon. (I'm going to miss that polka-dot ribbon...) You can see Gretchen's original card HERE

Everyone also made a sampler with all the cardstock colors and we laminated them. I forgot to take a picture, but if you're interested, I can get the information to you. Then as an e-a-r-l-y birthday surprise, Dee brought me a cake! Now my birthday isn't until the end of July, but Dee thought that we might not have another meeting before then because of Convention, so she wanted to make sure that she brought me a cake! That was so sweet of her - so after we stamped, we had cake! Yum! 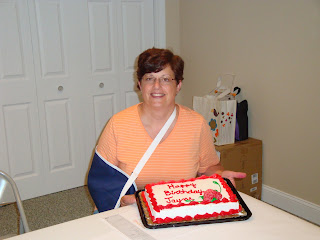 If you'd like to join my Chalk-a-holics group and make cards and have cake with us, we'd love to have you! Just contact me and I'll be happy to answer any questions you might have. Until next time...

Posted by Jayne Stenstrom at 8:13 PM