I can finally track my catalogs with the UPS shipping and according to their info, my boxes of catalogs should arrive this Friday, JUST in time for my open house on Saturday!

Talk about cutting it close.... 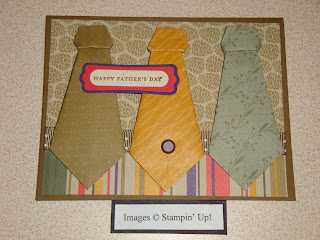 I know that Father's Day was last Sunday, but I'm sure there will be other times when you'll need a masculine card, right? I got the tutorial for the ties from Connie Babbert's website, her June 14, 2008, posting. (I told you that I bookmark things that I want to try later... well, sometimes that becomes MUCH later.) She has a wonderful step-by-step tutorial with pictures. You can see the tutorial HERE.

When my friends Pam and Judy were here a couple of weeks ago, we each made one of these cards. I love getting together and stamping with my friends. Too much fun!

For my card, I used the Autumn Traditions DSP (pg. 160 in the IB&C). The card base is Soft Suede cardstock (soon to be a core color!). The saying is from Teeny Tiny Wishes (pg. 145 IB&C) - definitely a versatile stamp set that will be in my collection for a long time! - stamped in Soft Suede on Naturals Ivory cardstock (pg. 159 IB&C) punched with the Word Window Punch, layered onto Ruby Red cardstock punched with the Modern Label punch, and then layered onto Elegant Eggplant cardstock that I free-hand cut around the outside. There is a strip of Soft Suede Polka-Dot Grosgrain ribbon behind the ties (I'm going to miss that polka-dot ribbon!) and we added a "tie tack" using a 5/16" Chocolate Chip Jumbo Brad (pg. 179 IB&C). I had first attached the ties with SNAIL adhesive, but found that I liked the look of the card better when the ties were popped up a bit... so after carefully peeling the ties off the card, I added Dimensionals to the back sides and re-attached them. MUCH better!

Now for my confession - I was originally going to give this to Jerry for a Father's Day card, but then I decided that he would like a card done with the Motorcycle stamp much better (one of the a la carte stamps on pg. 31 in the Summer Mini Catalog). So I put this card aside, and then promptly forgot about making another card for him for Father's Day! So he got nothing from me! However, Abby did get her dad a card with a motorcycle on the front, so he at least got one card. And no - it wasn't stamped, unfortunately Abby hasn't joined me in my stamping obsession so she goes to the store and BUYS her cards! It's just one of the disappointments in life that I have to bear...

Posted by Jayne Stenstrom at 1:34 PM