I saw this gorgeous card and just had to replicate it! If you like bling, you'll LOVE this card!

You might want to put your sunglasses on to look at it!

The poinsettia is made with the Silver Glimmer Paper in the Holiday Mini Catalog and the Blossom Petals Builder Punch. Twelve of the long flower petals were punched out, then one layer of six was put on the card with Dimensionals and then the second layer was put on top of that. 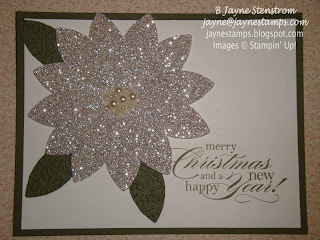 The leaves were punched from Always Artichoke cardstock and some texture was added with the Snow Burst embossing folder. Some Basic Pearls were added in the center and then Crystal Effects was squeezed over the top to help hold the pearls in place. The saying is from the Delightful Dozen stamp set - don't you just love the font? It's very elegant!

After making the card above, I thought that I should try it with the Red Glimmer Paper. It's pretty and stands out from the white cardstock, but doesn't have quite as much bling as the silver does! 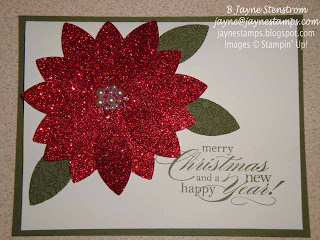 So get your bling on and try some of this paper! You won't be sorry, I'm sure!

Posted by Jayne Stenstrom at 7:30 PM