In addition to swapping cards with the Upscale Swap group at Convention, I also swapped cards with some ladies from a group known as VCRocks! This is the first year I've been a member of the VC Rocks group. I guess it was originally started one year when a few demonstrators who couldn't attend Convention decided to create a virtual convention! It's definitely a high-energy group. I can even feel that through the e-mails!

Here is a picture of the ladies that swapped. We had so many different cameras flashing and I think by the time my camera came up in the queue, everyone was taking a break (or maybe it was before we actually got settled in to pose for our pics). Either way, you can tell just from this picture that everyone was having fun! Some of us had just met in person for the first time, but it felt like we were "old friends"! 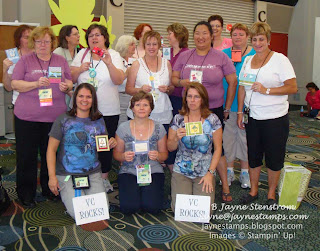 The first card I have to show you was created by Alice Leal. She used the Up, Up & Away stamp set to create a sweet baby card. 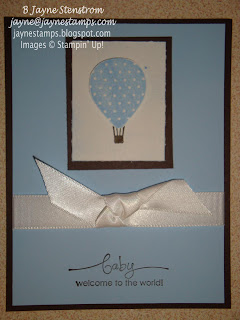 The next card was made by Brenda Hugar. She wanted to showcase the new Lace Ribbon Border punch and the Blossom Bouquet Triple Layer punch. She used Paisley Petals DSP for the background of the card, and also has Basic Pearls, Pear Pizzazz 1/2" Seam Binding, Decorative Label punch, and one of my favorite sayings stamp set - Sincere Salutations. Seriously, if you don't have this sayings set, it's one that I think you should get. You will use it over and over. 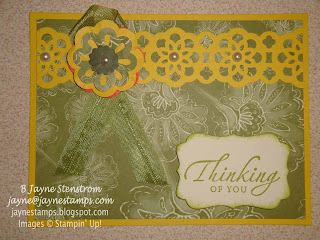 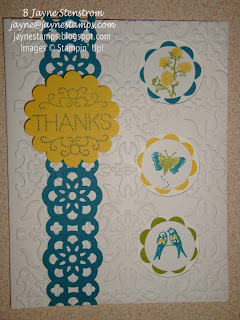 The last card for today is one of those - "now, why didn't I think of that?" cards. Debbie Flattum used the Blossom Petals Builder punch and punched Vellum Cardstock to create the "skirt". She sponged the vellum just a bit to give it some color. If you look closely, you can see there are two layers to the skirt - one made with the largest blossom from the punch and one made with the smallest petal from the punch (not sponged). The Round Tab punch was used to make the top of the "dress". Isn't this card just adorable? I love having new and different ways to use punches! 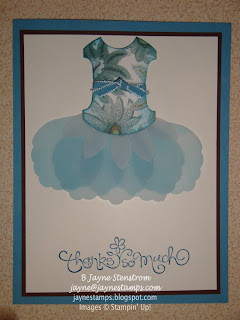 I have quite a few more cards from the group to show you, so be sure to come back and check them out! Until next time...

Posted by Jayne Stenstrom at 5:09 PM