One more day for the Online Extravaganza Sale 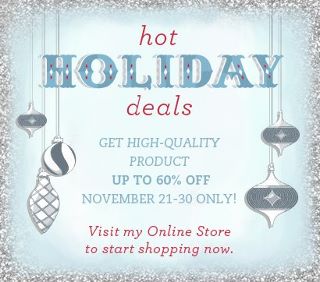 We have snow!!  At least a couple of inches of thick, wet, heavy snow has fallen in the last few hours.

This is the first snow that our teacup miniature Schnauzer has seen.  She's inside now trying to chew off all of the "snowballs" that stuck to the fur on her legs.  I didn't get a picture of that, but here's a recent picture of her looking adorable.  (Not that I'm biased at all!) 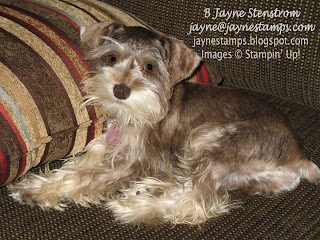 I have some great cards to show you today from our Chalk-a-holics meeting earlier this month.  This first one was made by Diane Kipp.  She always has such great cards to swap with us!  The snowman is from Snow Much Fun.  She also used the Frostwood Lodge DSP and the saying is from the hostess stamp set - Warmest of Wishes. 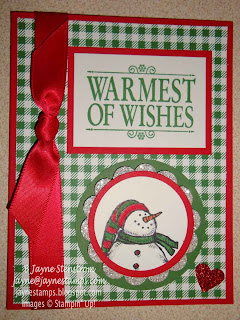 This was Sara Bolz's swap card.  She has four frames cut from the Peekaboo Frames Die in Chocolate Chip.  This picture shows the little frames open so you can see the "goodies" underneath.  The little stamps are from Jolly Bingo Bits.  There are 24 different winter-themed stamps in that set.  So cute and such a great pairing with the Peekaboo Frames Die.  Hey, Sara also used some of the Frostwood Lodge DSP.  If you haven't gotten this yet, you should order it.  It's so versatile and can be used so many ways! 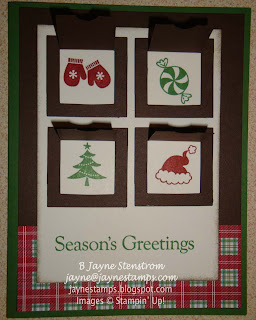 This was my card for the swap.  I showed you one very similar that was a twisted easel card on THIS post.  This card just opens "normally".  And would you believe that I ran out of Silver Glimmer Paper?  I ordered another couple of packages right away.  This paper makes diamonds look boring!  (Really!) 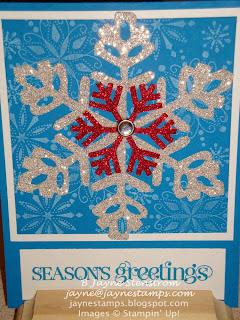 So how are you coming on getting your Christmas cards done?  Would you believe I haven't even started yet?  Maybe the snow will get me in the mood.  As long as I don't have to be the one doing this:

Posted by Jayne Stenstrom at 8:15 PM