There are some things in life that I wish were never-ending. Like some TV shows or movies that end just when everything is finally going right for the main characters, or maybe never-ending candy bowls filled with chocolate that has NO calories

(hey, a girl can dream, can't she?), or the beginning of spring, or beautiful sunsets.... Well, actually I think that we enjoy these things because they aren't never-ending -- and I think we appreciate them more for going through the other not-so-fun times.

But you didn't come here to listen to me wax philosophical

- you came to see some stamping!

I saw this card in the Stampin' Success magazine (exclusively for demonstrators!) a few months ago. I had it marked to make sometime but hadn't had a chance until my friend Judy came over yesterday for a stamping day. We try to get together about once a month or so to stamp, but we didn't get together much this summer. I guess there was just too much nice weather that needed to be enjoyed (especially out by the pool!).

So here is my never-ending card, starting with the "front" (if there actually is one). Each successive picture is of the card opened the next way. I opened it to the next direction by opening the center fold on each one. (Does that make sense? It's easier to see than describe.) The card size as you see it here is 4-1/4" by 5-1/2" (a standard card size). 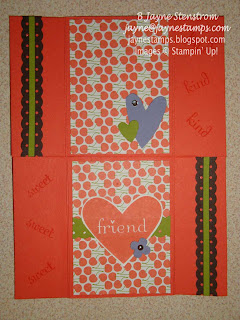 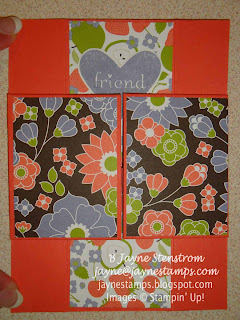 Second fold open... (sorry this picture is a little sideways - the card wouldn't lie flat so it looks a little funky in the photo) 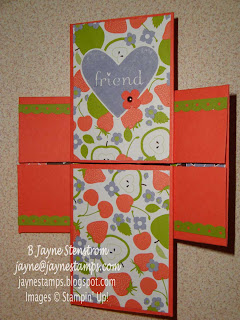 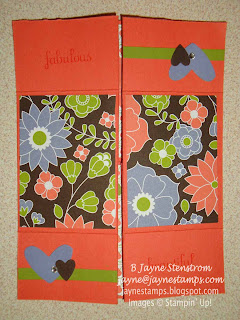 Back to the front... but if you notice, it's sort of upside-down from the first one - don't ask me how or why. I made it but I still can't really figure out how it works! 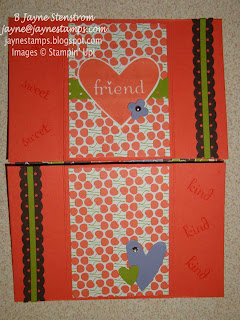 Here is the front of Judy's card. I didn't take additional pictures of hers because we did the same thing on the insides -- and my front would have used this DSP except I goofed when I was taping it down. No worries - I just improvised! 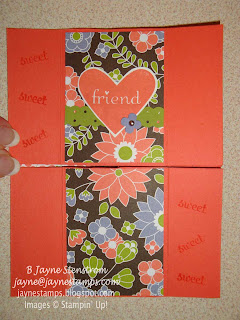 The paper we used is from the Berry Blossoms DSP package. Such great colors together! The card is Calypso Coral and the other cardstock accents are Lucky Limeade, Wisteria Wonder, and Early Espresso with a little Whisper White for the stamped heart (which is from the I {Heart} Hearts stamp set). We also used the Dotted Scallop Ribbon Border punch, Heart to Heart Punch, Itty Bitty Shapes Punch Pack, Silver Mini Brads, and Basic Rhinestones. We also added a few words on the sides using the Fabulous Phrases stamp set.

Now that we've made one, we agreed that it's really not as difficult as it looks. I think we were just a little tentative when we were putting it together. So even if I can't have never-ending chocolate, I can have a never-ending card to send a friend!

Posted by Jayne Stenstrom at 9:12 PM