I had the pleasure last week of catching up with an "old" friend. We had attended the same church for awhile about 30 years ago and then sort of lost touch when we moved about 20 miles away. We would occasionally see each other through the years, but didn't reconnect much. I did find out that she became a Stampin' Up! demonstrator a few years after I did, but we weren't in the same "group", so our paths didn't cross often.

Then about a week and a half ago I saw a posting from her on Facebook. She mentioned that she was baking Lemon Meltaway cookies and I made a comment that next to chocolate, I love lemon-flavored desserts. (Of course, chocolate is always my first love!) She said we should get together for lunch and she would bring some to me. So we made arrangements to get together.

We had SUCH a great time! We talked for about three hours - and I think we could have talked another three and still had more to say! And not only did she bring me some Lemon Meltaway cookies, she brought them in this adorable Fancy Favor box using the Fun Flowers die and made with the Berry Blossoms DSP (pg. 185 IB&C). 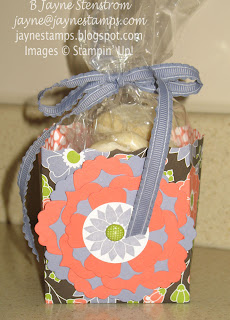 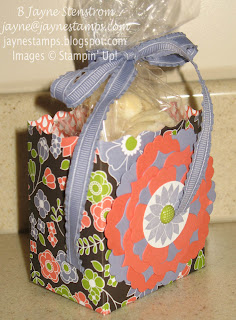 Isn't it cute? I have to say that these pictures don't do it justice. I had my old camera and it just doesn't take pictures quite as good as my other camera does.

Actually, Debra has a blog and she talked about our day together too. She has much better pictures - of the box AND the cookies. You can go check it out HERE.

And here we are together after lunch! (I bent down for this picture - Debra isn't quite as tall as this picture makes her look.) 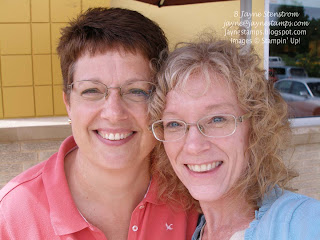 We're definitely going to keep in touch now. We don't live that far away from each other.

I've invited Debra to come to my Chalk-a-holics meeting this coming Friday and she's going to do her best to make it here. It's kind of funny because if it wasn't for our connection by both being Stampin' Up! demonstrators (and both having blogs about stamping), we may not have connected like we did. That's one of the best things about being a demonstrator. I have met new friends and reconnected with old friends through stamping!

By the way, now that you've seen the adorable box that Debra made, did you remember that you could get the Berry Blossoms DSP for free? During the month of August, when you purchase 3 packages of DSP, you get one free!

I hope that you have the opportunity to reconnect with an old friend from your past - whether it's stamping that brings you together or some other thing. Years ago I remember hearing a saying "Make new friends, but keep the old, one is silver, the other gold!" - and that is so true! I'm thankful for ALL my friends!

Posted by Jayne Stenstrom at 9:49 PM