Some of my fellow demonstrators and good friends came over last Friday for a "stamping day". We had so much fun that we decided to make this a bi-monthly event!

We decided to have the "hostess" for the day plan a "big" project. I chose to make kusudama flowers. I have seen these for a long time and have wanted to make them, but never took the time to do it myself. The long-range plan for these is to put them in a ball, but we were pressed to just get 12 of these done on Friday!

They are made by folding designer series paper squares and then attaching five of the folded squares together. We need 12 to make the kusudama ball, but that will be finished later! Here are my 12 flowers:

And a closeup of one: 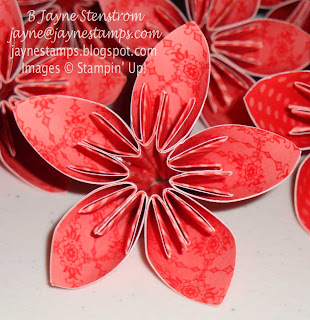 We also decided that everyone else who comes will bring a card project (sort of like a shoebox swap) for everyone to make. I have a couple to show you today and will show you the others in the next few days.

First is Sara's card. She used the My Friend stamp set and the new Lace Ribbon Border punch. The picture doesn't show it very well, but there are Basic Rhinestones in the center of each "flower". 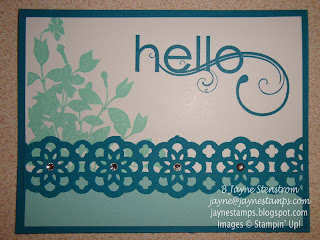 The next card is Cindy W's card. She used the new Sweet Floral background stamp. That is coming in my next order, which is supposed to be delivered on Friday.

Can't wait until it gets here! 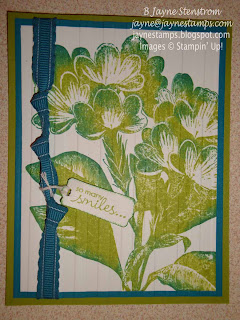 The two-tone look was made by inking up the stamp in Lucky Limeade and then taking a sponge dauber and adding Island Indigo to the tips of the flowers and the edges of the stamp. It's then run through the Big Shot with the new Stripes Impressions Embossing Folder. So pretty in real life!

I was asked a few days ago about Webster and what he's been up to, so I thought I'd better show you that he's still around and claiming his territory wherever he goes in the house. Good thing he's so loveable!

Here he is "helping" Sara with her Convention swap cards. 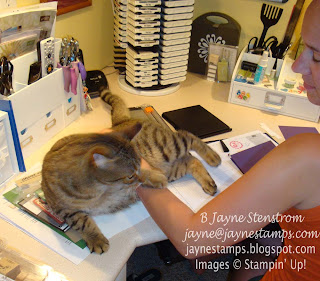 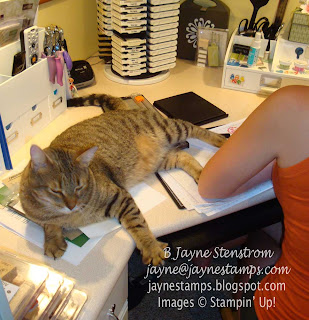 Hmmm.... I wonder how these stamp boxes taste. 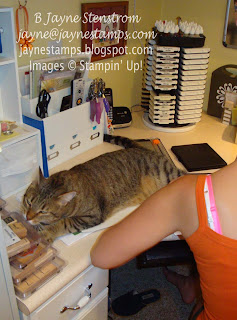 Here, let me hold onto your SNAIL for you. (Webster LOVES double-sided tape! I have to keep my large dispenser high up on a shelf in my stamp room so he doesn't chew it all up!) 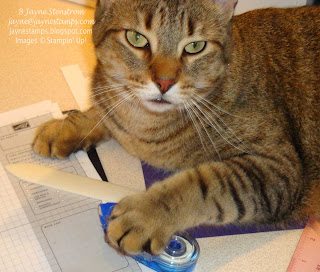 Let's see, there are two people stamping here, so I need to stretch out so that part of me is touching both of their stamping spaces... (Check out the size of those paws he has!) Never a dull moment - except when he's "recharging" (also known as taking a nap). 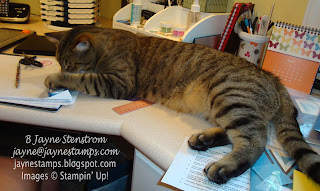 Posted by Jayne Stenstrom at 9:52 PM