Wow - is that title descriptive enough for you? This is the final card that I made with Judy and Becky the other day. I saw this card quite awhile ago on another lady's blog and I have been wanting to make one for a long time.

The fold on the card is called a "basket fold". This was a fold that I used to do on cards back during the first few years I was a demonstrator. This is definitely a "punched up" version!

Here is the card closed. Isn't it pretty? It looks like a bouquet of beautiful flowers! 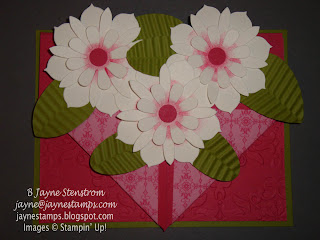 Here is the card with the insert removed. The triangle fold on the card also lifts up if you want more room for a greeting. 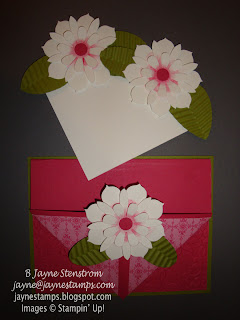 We were all so excited to make this card! Now that I've done one, I want to make some more! Thank you so much to whoever it was who designed the original card. It's even prettier in real life than the pictures show!

I had to show you Webster. While we were in my stamp room cutting things out on the Big Shot, he came walking in and stepped right up into the drawer, before letting out a sort of pathetic "meow". I guess he was letting us know that we hadn't been paying enough attention to him or something. What a cat... 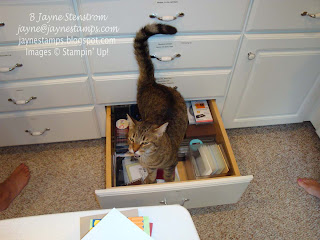 Posted by Jayne Stenstrom at 9:29 PM